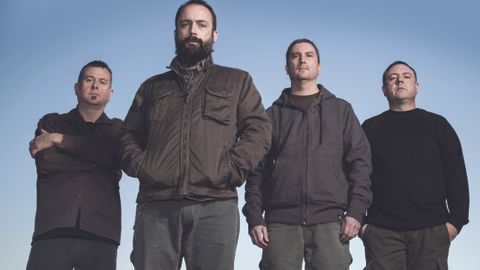 Steeped in tradition, but charged with a wilful, wayward energy all their own, Clutch’s role as rock’n’roll storytellers becomes more crucial with each album: carrying a torch, but bathing the roots of Americana in revealing new lights.

If Psychic Warfare sounds like a consolidation, it still brings Clutch’s strongest characteristics into sharper, and more irresistible narrative relief. X-Ray Visions kicks off at a full, whiskey-riled pelt that only rarely shifts down gear for the album’s duration.

Neil Fallon comes on like a lapsed preacher tearing hedonistically through the drifter-populated US backroads as the throbbing, biker riff of Firebirds bursts into a classic Clutch exultation, Sucker For The Witch grooves like it’s on hotplates and the glorious, twist-inducing thrust of Noble Savage recalls the ‘Roll up, roll up’-style service announcement of The Mob Goes Wild. For all its narrative urgency, there are moments where Psychic Warfare gathers some of that ol’ nocturnal atmosphere. *Our Lady Of Electric Light *suggests Grand Magus dumped in Louisiana and it’s the closing Son Of Virginia’s vast, searchlight riffs that reveal *Psychic Warfare *as the equivalent of The Great American Novel.