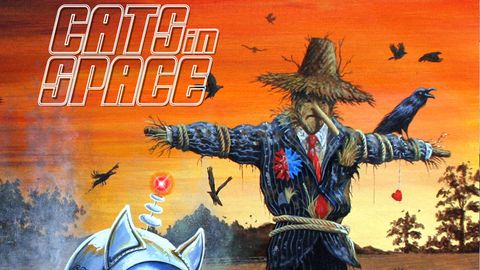 On the band’s 2015 debut Too Many Gods, the six members of Cats In Space stylishly pooled their individual experiences among rock’s also-rans to recreate the arty end of the 70s pop-rock spectrum: 10cc, ELO, John Miles et al. On new album Scarecrow they comfortably stretch their formula.

Although half the 10 songs clock in at under four minutes, all sound epic. The band channel the sounds of artists including Queen (often, but on Broken Wing in particular), Styx (Scars), and Elton John (a reverential steal on the cunningly postmodern 2’59”) and even Todd Rundgren‘s Utopia (Clown In Your Nightmare).

Despite having two guitarists, Scarecrow only occasionally explodes into riff-led rock. Instead, vocal harmonies – fabulous, luscious and pouting – rule the roost in AOR-style pop. Sometimes, despite the soaring voice of Paul Manzi and the keyboards of Andy Stewart, those harmonies are more memorable than the tunes, but for the most part Scarecrow works well.