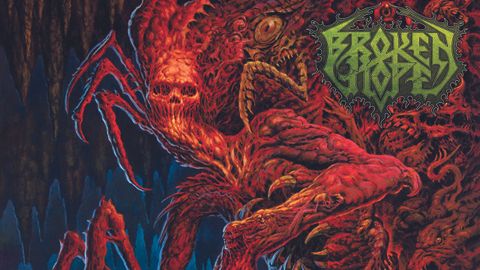 Considering Broken Hope’s dysfunctional and scattershot history, including a decade-long hiatus and the tragic passing of two former members – vocalist Joe Ptacek in 2010 and drummer Ryan Stanek in 2015 – that these Chicago-based OGs returned at all in 2013 with Omen Of Disease is a small miracle. After a few tours and lone original member, Jeremy Wagner, purchasing six of the late Jeff Hanneman’s guitars, along comes Mutilated And Assimilated, steeped in history, lore and sentiment. Beyond the album’s feel-good backstory, what’s on offer is brutal death metal whose most redeeming qualities are the leftfield themes hinted at in The Necropants (really), Outback Incest Clan and Hell’s Handpuppets. Most disappointing is the actual musical delivery which is overly linear and staid, monotonous and, despite the horror themed interludes, suffering from a lack of intrinsic dynamics, aligned to others and the ordinary. Cannibal Corpse’s Hammer Smashed Face might be one of death metal’s greatest moments, but we really only need them to play it, not have Broken Hope extract and dilute it over and over again like they have here.