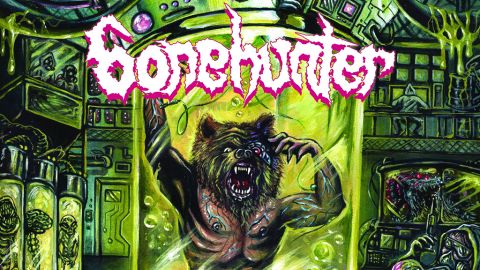 Spent the day running the church fête, loving Jebus and being serene? You need something to unwind to! Bonehunter are just the thing. These three perverted Finns have released their second slice of full-length filth – or rather, lax security has allowed it to escape. Like a plague-ridden monkey with a stolen bottle of cheap cider, these bullet-belted degenerates pose a general threat to society at large. Sexual Panic Human Machine straddles the line where thrash, black and death metal meet punk – which would probably be a dirty backstreet pub with chipped glasses, broken toilet doors and Sodom and Discharge on the jukebox. The songs are neither clever nor pretty, but they are virulently infectious. Imagine the epic black metal stylings of Sargeist and Baptism filtered through the framework of short, sharp punk rock. Utter filth in the best possible way.