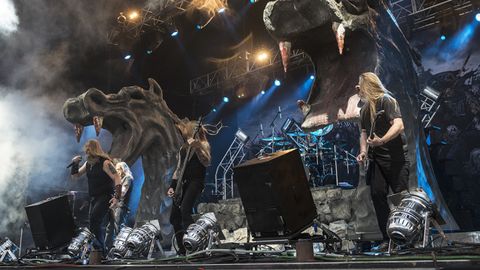 In many ways Amon Amarth are the perfect band for Bloodstock: beards, heroic tales and enough ale-raising anthems to lead an army to battle.

With such a formula there was no chance of the Viking-obsessed metallers being anything less than a highlight to raise the spirits. For starters the imperious, smoke-belching dragonheads and Dark Age battle scenes that make up the stage is easily the most impressive spectacle on offer all weekend. As Father of the Wolf denotes, smothering the band in smoke, a sea of plastic and weapons are raised from the throng (along with a lovingly-crafted cardboard longship that should rightly have made it onto Blue Peter) and flames erupts on cue.

As ever man mountain Johan Hegg revels in his role as master of the assembled horde, raising his drinking horn, leading the chants through Guardians Of Asgard, and summoning a barrage of pyro with a ridiculously large hammer of Thor. But as well as the mighty spectacle, the reason why Amon Amarth have climbed to the upper echelons is due to the bloodstirring storytelling and majestic delivery of the likes of Cry Of The Blackbirds and Twilight Of The Thunder God, which of course receive rapturous responses.

The scenes that greet finale Pursuit Of The Vikings are testament to the loyalty that the Swedes inspire, and it’s a fucking joy for any metalhead to behold.