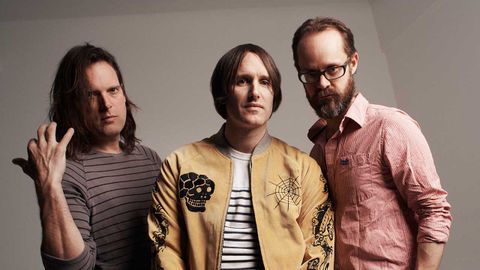 From fresh-faced young schoolboys with a penchant for excess to veterans before their time, it’s been a long, strange haul for Ash. That the core trio have managed to stay together is a tribute to their stickability and that Islands has rekindled their creative fire after 2015’s water-treading Kablammo! felt like a farewell augers well for a second career phase as elder statesmen.

Things have not run smoothly of late. Kablammo! aside, releasing a single every fortnight in alphabetical order during 2009-10 and then touring from Aldershot to Zennor to consummate their cheeky madness were gimmicks by a band who were struggling to keep themselves interested. But they’ve always been careful with their albums, sidestepping the covers and acoustic traps, and so aware of the quality-control button that Islands is only these cautious men’s seventh album since 1995’s scorched-earth debut, 1977. And it finds them in rude health, rediscovering and building upon what made them so appealing, while taking themselves to new places entirely. Islands is the sound of Ash’s liberation.

A resident of New York for more than a decade, leader and (almost) sole songwriter Tim Wheeler’s calling card was always his mastery of the fiendishly difficult knack of following punchy verses with soaring choruses. Here, having finally jettisoned the frustrating indie sheen which ensured they will never crack Wheeler’s adopted home, he’s both revisiting the best of his past and expanding his palette. As a result, the summery, super-sweary Buzzkill (featuring backing vocals from a pair of Undertones) is almost their greatest hits rolled into one effervescent bundle; Confessions In The Pool is propelled by some Stranglers-style keyboards, and the fist-pumping Somersault concludes with one of Wheeler’s trademark buzz-saw guitar solos.

But Wheeler is undergoing another musical growth spurt, and Ash are now making bigger music than ever before, so the sprawling It’s A Trap and, better still, the epic, regret-strewn (‘All I’ve got is time to think about the moment it went wrong’) Incoming Waves is the sound of a man finally having the maturity to express what he’s been meaning to say all along, even before the layered guitars carry it home.

Sales-wise, Ash’s glory days have perhaps long passed, but their constituency always tended to vanish once Dover slipped out of view. Right now, though, they’ve rediscovered themselves, and there’s no reason why a new audience can’t discover them.