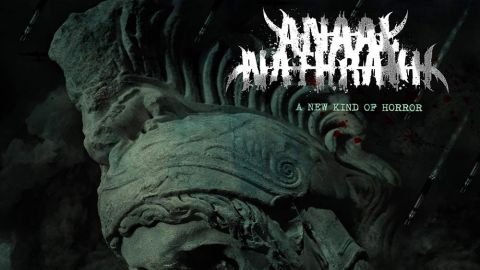 A New Kind Of Horror

Unable to pull on his mask in time, a soldier writhes, chokes and dies in agony as his comrades look on through the fumes of chlorine gas that pour into the trench. This harrowing account from World War I poet Wilfred Owen, ends sarcastically with the line “Dulce et decorum est pro patria mori”, meaning ‘How sweet and honourable it is to die for one’s country’, and it couldn’t be more apt for the horrifying, sardonic nature of Anaal Nathrakh’s new album, A New Kind Of Horror – an exploration of that most pointless and ghastly of conflicts 100 years on from the Armistice.

The merciless, rolling barrage of blistering speed, operatic electronics, caustic riffs and Dave Hunt’s unearthly vocal histrionics have been honed to perfection over their consistent recent efforts, with album 10 revelling in its bombast and sonic severity. While Forward!’s machine gun drums, tales of fallen troops and colossal riff is as succinct as the duo are likely to get, opener proper Obscene As Cancer, The Apocalypse Is About You! and New Bethlehem/Mass Death Futures scythe through the senses with their murderous wall of sound, ominous splendour and sorrowful motifs.

Sounding as unhinged as ever, whether on the King Diamond-aping The Reek Of Fear or The Horrid Strife’s sinister manifestations, Hunt’s range isn’t overawed by the ambitious symphonic scale unleashed by Mick Kenney, withstanding the tsunami of choirs, industrial overtones and mournful black metal assault of theatrical closer Are We Fit For Glory Yet? (The War To End Nothing).

Though only memories and monuments remain of those who paid the ultimate sacrifice in the trenches, Anaal Nathrakh are keen to point out that the world remains a hostile, horrific place, full of new and looming malice. As ever, they’ve created the perfect soundtrack for a species that never learns from its greatest mistakes.