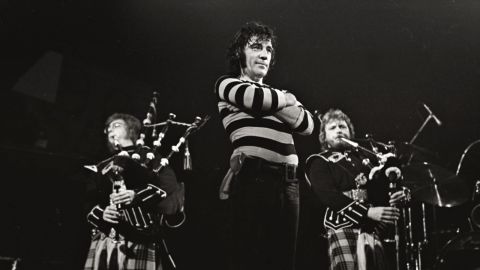 Alexander James Harvey was already a veteran of the working-class rock clubs that sprung up in Glasgow during the late 1950s, although his local fame and a lengthy apprenticeship in Hamburg’s 24-hour sleaze scene wouldn’t bear fruit commercially for well over a decade.

A Zelig-like figure, Harvey was dubbed ‘Scotland’s answer to Tommy Steele’, and billed as such when his beat band supported Johnny Gentle And His Group at Alloa Town Hall in 1960. Gentle’s boys were the Silver Beetles (what happened to them?); the self-styled King of Sheikh remembered tutoring them in stagecraft and the best way to extract the maximum juice from a Buddy Holly-heavy set.

Like David Bowie, his latter-day friend during 1969, Harvey was a man with many personae and a bewildering knowledge of everything from European cabaret (versions of Jacques Brel’s Next included throughout this 14-CD box set reveal him inhabiting the song’s skin) to folk, blues and a brand of glam as dark as a Berlin cabaret nightclub.

He had made three albums – Alex Harvey And His Soul Band, The Blues and Roman Wall Blues – when some bright spark asked him why he hadn’t made the big time? “I haven’t always earned my living from rock,” he shot back. “I was never hanging around Denmark Street waiting for some c**t to give me a demo.”

The chronology of The Last Of The Teenage Idols proves that point. We first hear him wailing What’s Wrong With Me Baby and another original, The Liverpool Scene, before ripping into Jailhouse Rock and Little Richard’s Going Back To Birmingham: in that opening salvo you get his values, his social observation and his heroes, wrapped up in 11 minutes of thrilling rock and soul.

Ever the iconoclast, Harvey enjoyed the show-business life; his stint as pit guitarist in the musical Hair at London’s Cambridge Theatre became another culture for his Petri dish. While he embraced the peace and love bit, his psychedelic era was short and sweet: the Giant Moth-period singles The Sunday Song and Maybe Sunday, and a brutal take on Jumpin’ Jack Flash.

All the key albums are here, with expanded live and radio extras rather than those pesky alternative takes that generally waste the listener’s time. The classic Live album from Hammersmith Odeon in 1975 showed SAHB at their peak, with Sgt. Fury’s money-in-the-bank discs The Impossible Dream and Tomorrow Belongs To Me ensuring that limelight was cast over Tomahawk Kid and Give My Compliments To The Chef. These showcased Harvey’s frontman expertise and the virtuoso chops of guitarist Zal Cleminson and the McKenna brothers rhythm section.

Judging by the noise, it was apparent that AC/DC’s Bon Scott realised he might turn Malcolm and Angus Young into a metal outfit offering dirty deeds done cheap. They owed Harvey for that. This was SAHB’s golden epoch. They grabbed Delilah and took her murderous assailant into the Top 10, dragging out the nasty nuances Tom Jones dared not, and made their audience a willing accomplice.

And then something else happened. Alex predicted the arrival of a snot-nosed band of youth who’d disown the elders, and punk came to pass, although John Lydon was a fan and cited The Faith Healer as a profound inspiration.

Somewhat bruised by seeing his prophesy fulfilled, Harvey returned to cabaret for the covers album The Penthouse Tapes, the least essential of the discs. He got his mojo back for SAHB Stories and for the band’s headline slot at the 1977 Reading festival (which proved to be their final gig), but his heart wasn’t in 1978’s Rock Drill. Nothing from SAHB’s Reading swansong is included here, though three final radio-session performances from the BBC’s Alan Freeman show capture the band’s final days. The madcap rhymes of Midnight Moses now sound like an unhealthy man’s wake-up call.

Having lived the cliché lifestyle to the hilt, Harvey tried to clean up and return to the greater good of his ecological concerns, his books, art, and the Celtic roots that shaped him. His later recordings saw him looking back at Roman Wall Blues, where he’d adapted WH Auden’s poem about a lonely soldier patrolling Hadrian’s borderline. The final version here is particularly poignant. The box set closes with Billy Bolero from the posthumous The Soldier On The Wall: a sad farewell and goodnight to the King of the Cowboys who’d lost his guns. But boy did he pack a lot in while he still had them on his hips.