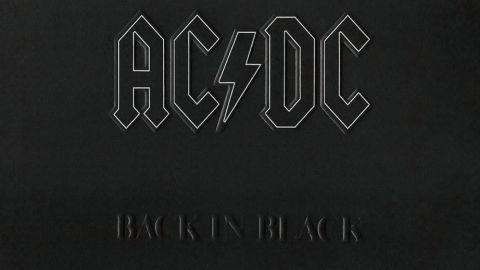 There was a powerful significance in that title, and that none-more-black cover. Angus described Back In Black as “our tribute to Bon”, but it became so much more than that. The biggest-selling album of AC/DC’s career, and the second-biggest-selling ever (after Michael Jackson’s Thriller) Back In Black is the mother of all comeback records and arguably the greatest hard rock album of all time.

The way the band tell it, it was the worst of times and it was the best of times. Bon’s death had shook them, but this new singer gelled instantly and the ideas came thick and fast. Recording in the Bahamas, and three songs in to the recording, newbie Brian Johnson worried that he was going to run out of lyrics. Looking for inspiration for Hells Bells, a tropical thunderstorm raged outside. “I said: ‘That’s rolling thunder, that’s what they call it in England’,” remembered Brian. Mutt Lange told him: “Rolling thunder? Write that down.” The rain fell. Brian noted, ‘Pourin’ rain!’ “And the wind whipped up – ‘I’m comin’ on like a hurricane!’ I was gone. The song was ready that night. I hadn’t even heard the track…” Similarly, his “southern preacher” spoken word intro to Rock And Roll Ain’t Noise Pollution was done off the cuff in one take: “I never ever thought that it was gonna be on the record,” said Brian.

Back In Black, Malcolm said later, was AC/DC remembering “the good times” they’d had with Bon. Have A Drink On Me had been recorded as a demo with Bon on drums. The lyrics (‘Whisky, gin and brandy/With a glass I’m pretty handy’) were a drunken toast from Brian to his predecessor. With You Shook Me All Night Long Brian proved he had as much of a way with a double-entendre as his predecessor: ‘She told me to come but I was already there.’

On previous album Highway To Hell, Mutt Lange had polished up the band’s sound and made them more commercial without losing their core identity. You Shook Me All Night Long perfectly illustrates Lange’s ability to bring an entirely acceptable pop sensibility to a hard rock band as he helps the band deliver a singalong, ‘arms around your best mate’s shoulder’ winner of a tune.

It has so many classic songs: Shoot To Thrill, What Do You Do For Money Honey (a song that dates from the Powerage sessions), and of course that genius title track, built on a juddering riff that sounds like the blues if it was deconstructed by Satan and then rebuilt by Tony Stark. Out of tragedy came AC/DC’s greatest triumph.