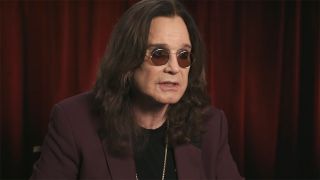 In the latest issue of Metal Hammer, out now, we sit down with Ozzy Osbourne for a candid, no-holds-barred conversation about his impending (and partially rescheduled) No More Tours 2 tour, winding down his 50-year career and his unbelievable life in the music industry.

In 2002, Ozzy became one of the decade’s first (and most unlikely) reality TV stars, as he and his family let MTV into their home for the colossally successful show, The Osbournes. While it made Ozzy a household name outside of the rock and metal world like never before, it also took its strain on the Prince Of Darkness, as he reveals in our interview.

“All I can say to you is this: number one, if someone offers you a shitload of dough to be on television, you’d have to be a mug to turn it down,” he insists. “I thought it was gonna be a piece of cake, but you have a camera crew living in your house for three years and see how you feel at the end of it. You feel like a fucking laboratory rat.

“It got to the point where I was falling apart emotionally,” he continues, “because you can’t fucking relax. It doesn’t matter where you go for a piss, you’re paranoid there’s a camera in there. But I’m not ashamed of it and it’s a big hit. Would I do it again? It’s now Kardashianville. The world’s changed, man.”

Read the rest of Ozzy’s exclusive interview only in the latest issue of Metal Hammer, which you still have a few days to pick up.