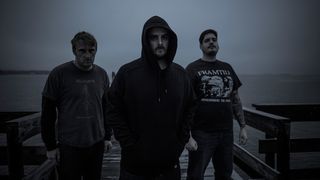 Record Store Day is upon us once more and hundreds of shiny new wax discs will be fought over in queues all over the world for the next 24 hours.

Some music fans love the annual April celebration of vinyl and all the colourful, rare releases it brings. But not every audiophile sees Record Store Day as a positive for the music industry, especially Todd Jones – frontman for Californian powerviolence trio Nails.

“I don’t fuck with Record Store Day at all, I hate Record Store Day,” Todd tells Metal Hammer over the phone from Orange County, California. “It’s completely fucked over things for regular bands – go ahead and have your multi-coloured vinyl reissues you fucking poseur. The fact is that when [Nails’ 2013 album] Abandon All Life came out before the pressing plants were backed up, we handed our record in to Southern Lord on January 15 and our record was out by March 20. For [upcoming album] You Will Never Be One Of Us we handed everything in to the record label on January 20 and our record’s not coming out until June 17. Why? Because of fucking Record Store Day, that’s why.”

The fact that pressing plants get clogged up with Record Store Day releases isn’t something new. In 2014 The Quietus investigated the problems with RSD, in which distribution company Kudos explained that “pressing plants were prioritising releases specific to Record Store Day, often on major labels.” Although in the same feature, Spencer Hickman who runs Record Store Day in the UK has noted that it’s not just this one day delaying the pressing plants. “The vinyl boom in general is impacting massively on factories,” he told The Quietus, “because new plants aren’t springing up. No one makes the machinery anymore.”

Of course this doesn’t ease the frustrations felt by Todd and doubtless more bands in similar situations having their albums delayed.

“All you people out there that love Record Store Day have fun with your stupid multi-coloured vinyl,” Todd concludes, “but all your favourite bands’ records are taking six months longer because of all that poseur bullshit. That’s what it comes down to.”

What do you think about Record Store Day? Let us know below!