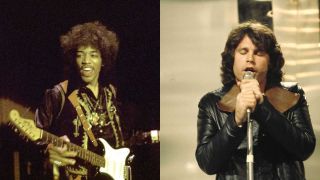 The late 60s was the dawn of the era of the superstar collaboration. But for every Blind Faith or Crosby, Stills & Nash there were a dozen drunken on-stage jams featuring rock’n’roll’s biggest stars that have slipped down the back of the sofa of history.

One of the most infamous was the fleeting union between Jimi Hendrix and Jim Morrison on stage at hip New York club Steve Paul’s The Scene in the spring of 1968, while Janis Joplin looked on.

Peace and love wasn’t on the agenda when what should have been a supreme meeting of minds disintegrated into a chaotic brawl that ended with Joplin smashing a bottle on Morrison’s head.

Here's what happened, as told by those who were there.

Lester Chambers (vocalist, The Chambers Brothers): We were the house band at the Cheetah club, just a few blocks away on Broadway. When we finished at the Cheetah we would walk over to the Steve Paul Scene. You would come in off the street, go down four or five steps and you were in the club.

It was a small space, maybe a hundred people at the most, so you got to mingle with whoever was there: John Lennon, Johnny Winter, Buddy Miles; if Janis Joplin was in town she’d be there; Al Kooper of the Blues Project was down there a lot.

Al Kooper (guitarist/ organist the Blues Project): When the late shows finished, the waitresses would begin their clean-ups, and the participants of that night’s jams would gather in the dressing rooms. The unknowing, paying customers would settle their bills and set out for the suburbs, and then the action would begin. We’d slowly come out, like bats in the night, and take over the stage.

Lester Chambers: You could only get about six people comfortably on that stage. If it got too crowded, sometimes musicians would take up a little area in front of the stage or at the side.

Al Kooper: Hendrix loved this. He would show up more often than not, always with his guitar and his trusty Nagra [reel-to-reel tape recorder] in tow. He would fastidiously set up the Nagra next to him and record every jam he participated in.

Danny Fields (publicist, Elektra Records): I was working for Elektra, which meant I was working for Jim Morrison, but he and I didn’t get along. In my professional capacity I kept an eye on where Jim was, because wherever he was there would be trouble. I knew he was at The Scene that night, and Jimi was always there. And I was a teenage boy who worshipped Janis, so I knew she was there as well.

Sam Andrew (guitarist, Big Brother And The Holding Company): We spent many nights at The Scene, whenever we were playing in New York. They were just jamming that night on tunes that everyone knew in common, especially blues. I almost never sit in on things like that because it’s really hard to get the right sound if you’re going through an unfamiliar amp and everything.

Lester Chambers: The band that night, as I remember it, included Randy Hobbs, Bobby Peterson and Randy Zehringer, all from The McCoys. I can’t remember anybody else on guitar, but usually when Jimi went up to play guitar nobody else did.

Michael J Weber (audience member): When Morrison showed up he was very intoxicated, God knows on what, and he was slurring, very stoned. Jim was an ornery character when he wanted to be. He was very in-your-face. But everybody was at that time.

Jimi was very different from Morrison. He had a lovely vibe about him. He was very shy and reserved. He was the same soft-spoken guy when he talked to women. Morrison was very abrupt, he said whatever he wanted to say.

Sam Andrew: Jim swaggered over to where Janis and me were sitting and, without any provocation at all, he just yanked her hair down to the floor. She was already very jaundiced about him, so then she hit him with a bottle of Southern Comfort, broke it. It was almost like a Vaudeville act.

Danny Fields: Janis’s hatred of Morrison, I don’t know where it started. But if you mentioned Jim’s name she would say: “That asshole.” She was not going to put up with what she thought was his childish, disgusting, rude behaviour, wherever she encountered it. It riled her. She was past giving him a chance.

Lester Chambers: When Morrison got onto the stage, his voice was heard. He made a couple of “Oh-wow-wooooh” kind of noises. He was so drunk he had to hold on to the mic stand, and every once in a while, he’d go: “Oooooooh! Waughhhhhh! Awoweee!” At one point, Jimi said:“Ladies and gentlemen, you have heard the sound of Jim Morrison.”

Rick Derringer (guitarist, The McCoys): Jimi recorded the whole scene between him and Jim Morrison. Jimi was playing and he was recording himself that night in a jamming situation. He had one of his hats on that he used to wear, that little cowboy hat kind of thing.

Michael J Weber: Jimi was already playing when Morrison got down on his knees and started giving Jimi like this mock blow job. He was being very lewd and crude.

Danny Fields: So Morrison has his arms wrapped round Jimi’s legs and he’s still screaming: “I wanna suck your cock!” He was very loud. And Hendrix was still attempting to play. Morrison wouldn’t let go. It was a tasteless exhibition of scene-stealing – something Morrison was really into. To top it all off, Janis, who had been sitting in the back of the room, saw this happening and suddenly appeared at the edge of the stage with a bottle in one hand and her drink in the other.

Sam Andrew: I didn’t actually see Morrison kneeling down in from of Jimi, but Janis had this real righteous sense of when someone was taking advantage of someone else, or trying to steal the show, which Morrison was. She would become like a schoolteacher all of a sudden, and felt she had to step in to teach someone how to behave.

Danny Fields: Janis stepped in and hit Jim over the head with the bottle, then she poured her drink over him. The three of them started grabbing and rolling all over the floor in a writhing heap of hysteria. I swear there was, like, fur flying, like a cloud of dust around them, as if they were in a dry river bed. They were in a tangle of broken glass, dust and guitars. A lot of dust and feathers and leathers and satins went flying around.

Sam Andrew: I think Janis was just trying to tell him to stop being an ass. If he’d got up and sang a song, that’d have been fine, but we were there to listen to Jimi and he was stopping us from enjoying it.

Danny Fields: Naturally it ended up in all three of them being carried out. Morrison was the most-seriously hurt. They all had minders and roadies, and there were guys from the club whose job was to help keep order.

Janis’s guys went straight in there to help her, no questions asked, just get them apart, get them out of there and back to the hotel. Jimi was part of the family at The Scene, so the club guys would wade in to help him, and Morrison had been sending off danger signals from the moment he got there. He was behaving like someone from the sewers.

Lester Chambers: I don’t remember the fight between Jimi and Jim. I heard they had an argument, but the club was real small and very hot. It didn’t have any air-conditioning, so you would step outside to get some air and cool down. Lester Chambers: It didn’t stop the music. After Jim and Janis were gone we just kept on playing.

Danny Fields: After The Scene closed at four am, people would move on to Steve’s funny little house in Chelsea. People would sit around and listen to albums and then, eventually, everybody would disperse, and there was an all-night coffee house across the street where you’d often find Jimi sitting with a peaceful cup of coffee at five or six am.

The Scene closed its doors 18 months after the disastrous Hendrix/Morrison/Joplin dust-up, victim of one too many unfriendly visits from local gangsters. The final show, featuring Sha Na Na, turned into a full-scale riot.

Rick Derringer of The McCoys went on to bigger things, notching up a string of solo hits in the 70s.

On September 18, 1970 Jimi Hendrix died in London after choking on his own vomit. Within 10 months, Janis Joplin and Jim Morrison were also dead. All three were 27 years old.