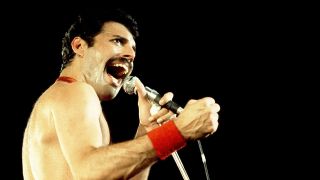 Queen's lead singer Freddie Mercury was an enigmatic man of mystery to many. But Peter Hince worked for Queen for 12 years as roadie for Mercury and for bassist John Deacon. When Hince started out with the band in 1975, they were recording the classic album A Night At The Opera. He bowed out after their huge show at Knebworth on August 9, 1986 – what turned out to be Queen’s final performance with Mercury.

Hince tells of his career with the band in his book Queen Unseen. It offers a revealing insight into the life of the frontman and the years in which Queen became one of the biggest bands in the world.

Here, Hince tells us about Mercury: the man behind the myth. He spills the beans about the other members of Queen – Deacon, guitarist Brian May and drummer Roger Taylor. And he reveals the truth about that legendary Queen party…

You knew Freddie Mercury well. What was he really like as a person?

“People talk about Freddie and his ego, but his ego was not as big as people think. It was all a persona. He could make fun of himself, whereas some of the other guys in the band couldn’t do it in the same way. You could have a laugh with Freddie, but you knew were the line was. He wasn’t necessarily the prima donna that everybody thought he was.”

Was Freddie the greatest rock star of his generation?

“As a frontman he was unbeatable. It wasn’t just about his voice but the way he commanded the stage. I loved Zeppelin and The Who – Plant and Daltrey were great frontmen – but I think Fred had more in terms of showmanship and presence. For him it was all about interacting with the audience, knowing how to play an audience and get them on his side. And he gave everything in every show.”

Did he have a certain presence off stage as well as on?

“Oh yeah. Fred was unique. I used to work for Bowie, but no one had the aura that Fred had. Maybe Mick Jagger did, to a degree. But with Fred there was always something about him, from the very early days. He had that kind of aura. Not aloofness. But you felt that he was someone special.”

For all the charisma that Freddie had, did you sense that beneath it all he was insecure?

“Oh, totally. Always. He did have a lot of insecurities – not professionally, but personally.”

When did you first meet Freddie and the other guys in Queen?

“1973. I was working for Mott The Hoople and Queen were supporting them on a British tour. Queen’s first album had just come out.”

And you worked for Bowie before then?

“Yeah. I was Mick Ronson’s roadie on the Ziggy Stardust tour. After the Hammersmith show and David ‘retired’, I worked for Mott. And by the time Mott had finished in ’75, I needed work and luckily I got the job with Queen.”

And you witnessed first-hand their rise to global superstardom…

“Queen wanted to be the biggest band in the world. They made no secret of that. And yes, I saw it all happen. In the 70s they were a fantastic rock band, and in the 80s they became a fantastic pop band.”

You were also witness to the recording of many classic Queen albums.

“I was there when Bohemian Rhapsody was recorded. I just remember not knowing what the bloody hell it was all about! And I was with Freddie when he wrote Crazy Little Thing Called Love. That was a really special moment.”

There is one major disappointment in your book. You refer to an infamous story about the party staged in New Orleans in 1978 for the release of Queen’s album Jazz – at which, it was alleged, guests were served cocaine from bowls carried by dwarves on their heads. You call the story “complete bollocks”…

“It is – complete nonsense. There were dwarves there, but they were hidden under plates of liver and other cold meats.”

John Deacon was always the quiet man of Queen. In a sense, he is the great enigma of the band…

“John is virtually a recluse now. He wants to remain private and I think people should respect that. John was always a very down to earth, regular guy. He had six kids and was really into his family, but he also just happened to be in one of the biggest bands in the world.”

How would you describe Brian May?

“Brian is one of the most complex people you could ever come across. He’s got a huge heart and wants to be nice and kind to everybody. He was the most sensitive of the band in some ways. But like most people he’s got another side. He can be quite ruthless.”

“Roger loved the rock star lifestyle – all the cars and the country houses. He certainly enjoyed his money, as Fred did, whereas Brian and John, being more traditional family men, they held back a little bit. But Rog loved it. At times he could be a little bit rock-starry, but I think he’s mellowed in the last few years. He’s more reflective.”

Freddie was always a gay man hidden in plain sight. Was that difficult for him during the less enlightened times of the 70s and 80s?

“Very much so. Obviously after The Game in 1980, with him becoming more overtly gay with the moustache, I think things became a little difficult for him then.”

Live Aid, in 1985, was a defining moment in Queen’s career. What do you remember most of that day?

“Well, at first they weren’t keen to do it. There were serious problems within the band at that time. I think it’s quite likely they would have broken up because (1984 album) The Works hadn’t done anything in America, they didn’t tour it there. And Fred was doing his solo stuff. So Live Aid galvanised them. It was a watershed for the band. They got the audience at the right time with the right songs. Maybe they felt they had something to prove. When they came off, you really felt – and they felt – that they’d stolen the show. Elton said that to them afterwards: “You fuckers!”

Queen lead singer Freddie Mercury: "As a frontman he was unbeatable"

In all the years that you worked for Queen, what were the best and worst parts of the job?

“The best part was the travel, the experiences, and that kind of reflected glory from working for a huge band. The worst parts were when you’re not appreciated, you’re feeling used and abused, when it’s a horrible, dirty, mucky existence – loading trucks, not sleeping for two days. But that was all part of the job. And the bottom line was it was a job.”

When you finally quit, in 1986, did you have sleepless nights about that decision?

“Not really. One day something just clicks. It got to the point where I was working my bollocks off, I didn’t feel I was being appreciated, and there was no way to further yourself within the organisation. I didn’t want to work for another band. I thought I’d go out at the top of my game. I also felt I probably couldn’t have gone on much longer. It does get to you. I don’t regret it.”

Roger says he likes your book. Did that surprise you?

"lt did. He could be a bit aloof. So that was quite nice. I think he’s a lot more relaxed about things these days.”

How do you feel about Roger and Brian carrying on as Queen without Freddie and John?

“Well, when Fred died, John was like: ‘That’s it, there’s no more Queen.’ Brian and Roger wanted to carry on in the various guises of Queen, and I understand why they want to do that. I’m not sure that’s the right thing to do. They can still be musicians without using the Queen name. But the fame game – people like to keep it up as long as they can.”

Many Queen fans would agree with you: no Freddie, no Queen.

“That’s most poignant thing. After Fred died, you can never recreate that, no matter what guise it is. I saw the Queen + Paul Rodgers thing, and he’s one of my favourite singers, but it was completely the wrong fit. And as for Adam Lambert, I’m sure he can sing, but it’s a bit like some Vegas cabaret in a way. You know, if you never saw the band, well, here’s half the band. But it’s not for me.”

Queen Unseen by Peter Hince is out now.