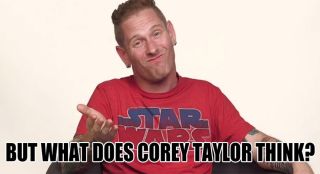 If you’ve ever been within ten-miles of Metal Hammer’s Facebook page you’ll have no doubt heard the frantic typing of hilarious men and women around world, all gunning to type the words “But what does Corey Taylor think?” before anyone else. It’s, quite frankly, the pinnacle of humour. Nothing funnier has ever or will ever be typed on the internet. It is the Bret Hart of memes. It is the alpha and the omega of Facebook comments.

Once entered on any thread, the man or woman who says it first is hoisted onto the shoulders of giants and paraded around the internet like the absolute legends they are. Heroes amongst us mere mortals who are content with just reading the article and moving on with our lives. It is they who we aspire to be; one day we will run with them. One day. One day. One day…

But what does Corey Taylor think about all this? We asked the man himself about being the subject of a meme that has taken over music Facebook pages and message boards far and wide. This is as meta as it gets.

How do you feel about having your own meme?

“I think it’s hilarious. It’s funny, because people act like I just toot my own fucking horn or chime in. I only give my opinion when people like you ask – I’m not online doing this shit. I think that meme is in reaction to the fact that my opinion gets picked up by a million fuckin’ media outlets, and then it’s turned into a thousand different news stories, and it’s taken so far out of fucking context that you have to trace it all the way back to the source material to figure out what’s being said.”

Is it annoying when that happens?

“It’s a pain in my ass, however the meme is hilarious. I love that it’s used in a way that takes the piss out of me but also takes the piss out of other people as well. It’s saying, ‘Stop doing this clickbait bullshit, we don’t care. If we did care, we would’ve read the fucking interview.’ I think it’s funny.”

Does it ever piss you off?

“A little bit, but I get over it – you have to have thick skin in this business. If I had a dollar for every time I’ve been made fun of, screamed at or talked shit about, I wouldn’t need to do this gig, or I’d be doing it at a whole other opulent level, coming in a gold fucking limo handing out titles for everyone!”

Corey Taylor and Stone Sour are on the cover of the latest issue of Metal Hammer! It’s available in stores now or you can buy your copy online. It’s also available for TeamRock+ subscribers.