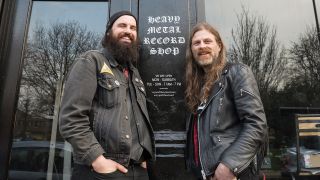 So, what was your plan when you set up Crypt Of The Wizard?

Charlie Woolley, manager: “Marcus [Mustafa, shop owner] and I grew up surrounded by vinyl, so once vinyl made a comeback it made perfect sense to us as fans to sell records. We’re pleased the scene has returned to music in the format it was intended, so we have this heavy metal jacket on our shoulders. Very few people become musicians just by picking up instruments; the process starts with putting on a record. Vinyl sounds so much nicer and you feel like you’re playing the record yourself when you position the needle.”

So everyone’s looking to you to bring their music collections back to life?

“People come in and tell us they’ve seen records online but never held them or looked at the back. We’re also restocking people’s cupboards from the 70s, 80s and 90s. It’s great when people tell us they used to own albums on vinyl and they wanted it back – that’s why [Norwegian black metal band] Black Magic and Sleep’s Dopesmoker sold out so quickly. A collector who owns 55,000 records came in and it felt weird selling him records knowing they won’t be played!”

Isn’t that a Mortiis reference in the shop name?

“We knew it was the perfect name when we told a non-metalhead that we wanted to call it Crypt Of The Wizard and they said, ‘You’re going to call it what?!’ Mortiis commented on our Facebook page under his real name that we had a ‘nice name’, so we’ve had his blessing!”

Bringing back vinyl brings back the importance of visuals and artwork. How metal does the shop look?

“We’ve painted everything black to focus on the album covers, which bring all the colour and life into the shop. The art needs to speak for itself. We keep changing our wall art because it’s amazing – right now there’s Volahn up on the wall. It’s amazing how long black metal’s been going and just when you think every cliché has been done, they come up with ‘Aztec black metal’ out of nowhere.”

So is this more than just selling music to you?

“We are hoping to make Hackney a destination where people come for their music! We’re very hangover-friendly too – we’ve got a lovely coffee machine and we’ve partnered with Dark Arts coffee. We’ve got a black Chesterfield sofa, so we’ve got a great place to hangout, drink coffee and listen to great music. We’ve soundproofed the shop so we could have bands play inside, however they’d all have to stand in a line. We’re discussing putting on some live gigs and we’re working with Live Evil festival to promote some small bands and DJ nights, too.”

On a scale of 1-10, how metal is owning a metal record shop?

“As cliché as it is, we have to say the metal number 11! There are metal record stores popping up in other countries now – there’s Stained Class in Canada and Nuclear War Now! in Oakland, California. The timing’s right and the international scene is strong enough to support these endeavours and it feels great. You think you know a lot about music but then another 100 bands’ records come in and we have to listen to them!”

Crypt of the Wizard is Open Tuesday to Sunday, 11am to 7pm. Check it out if you’re in the london area!

The shop
You can visit Crypt of the Wizard in London via Hoxton station at 324c Hackney Road, London E2 7AX

Use Discogs to keep track of your vinyl collection on the move, which you can find via www.discogs.com or download their app from the App Store via tinyurl.com/hogaxdv

This is the most metal record store in London