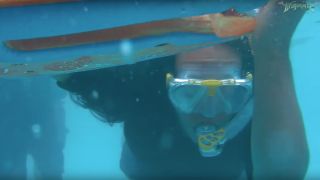 We all know Dragonforce's Herman Li loves a good guitar solo, but he must be getting a bit bored playing the same face-melter night after night. So how do you spice up something like a power metal shredfest? GET YOURSELF INTO THAT BLOODY SWIMMING POOL.

Aboard the Full Metal Cruise, Dragonforce played in front of a swimming pool of circle pitters (which already sounds pretty awesome), then Herman took his new floaty guitar into the pool to finish the solo!

Prior to the stunt, Herman says he's never going to do it again, but you can relive the experience for eternity by watching the video below.