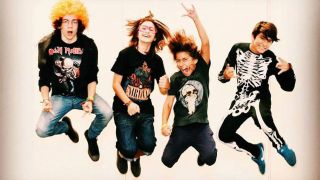 Poison Gas are a classic rock covers band from Belo Horizonte, 270 miles north of Rio de Janeiro. So far, so normal. But what makes the band unusual isn’t their location in Brazil’s first planned modern city, but their ages: all the band members are 12 or 13.

Made up of Davi Leão (vocals, bass and keyboards), Gabriel Colen (vocals and guitar), Pedrinho (lead guitar) and drummer Rafael Baino, the band are beginning to gain a reputation for their set, which includes such classics as Bohemian Rhapsody, Hotel California, Sweet Child O’ Mine, Comfortably Numb and Metallica’s Enter Sandman.

Reviews on the band’s Facebook page includes such compliments as “Watching the youth of today I would have thought the apocalypse would be Wednesday or Thursday of next week. But Behold! Here are Poison Gas, who’ve given me hope for good old rock’n’roll,” and “Dude, I saw these kids playing today and literally cried. So beautiful to see! Quality rock despite the age! Exciting!”

And that’s the thing. The band may be a little rough around the edges, but with such obvious talent and enthusiasm on show, the good people of Belo Horizonte will never be short of entertainment.