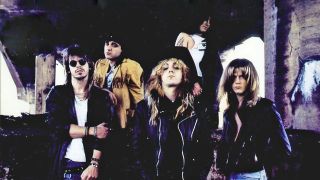 In a different world, just a hairpin turn away from ours, Rock City Angels would need no introduction. After all, they were a five-man gang of drug-abusing womanisers from Los Angeles, dressed in black leather and cowboy boots, with a hot new sound that mixed sleazy, punky glamour with tough, bluesy, American teenage rock’n’roll.

They had looks, hooks, bad habits, a wildly self-destructive lead singer, and a record contract worth several million dollars. Appetite for destruction? Hell, these boys were done with destruction by noon and well on their way to oblivion by dinner.

But along the thorny road to rock’n’roll stardom, something strange happened to Rock City Angels in the summer of 1986. Actually, a whole lot of damn strange things happened to them.

“I’m sure all bands got their stories, but this shit just don’t go away, brother.” Rock City Angels drummer Ringo Jukes is sitting on his porch in Arkansas, scratching his chin and recalling the heady days when it was commonly accepted that his band would be the next big rock’n’roll attraction of the 80s. In particular, he’s addressing the wild allegations of Ann Boleyn, the infamous head of indie metal label New Renaissance Records.

Boleyn discovered Rock City Angels back when they were still scruffy young white-punks-on-glam in their native Florida. They had recently graduated from the snotty destructo-rock of their earlier band, The Abusers. Lead singer Bobby Durango [who died in 2012] and bass player Andy Panik formed the first version of the Angels in 1984, and recorded a rough but promising demo of songs in the vein of The Stooges and The New York Dolls. Boleyn loved it, and convinced the band to move to Los Angeles. Jukes joined three weeks after they arrived. As the Angels quickly gained a reputation as both a lethal rock’n’roll band and a toxic mess of addiction and surly behaviour, the major labels came sniffing around – which is when the trouble started. Allegedly.

“She put out this crazy shit,” Jukes laughs. “She was saying that if she didn’t turn over the band’s contracts to Geffen, people were threatening to kill her. She said somebody tried to run her off the road one night, and that she was getting all these phone calls. It was like a bad extortion movie. I think she was just trying to hype that album [the demo album, Glam, was released by New Renaissance in 2000], because I don’t remember her ever coming up to us and saying: ‘Guys, they’re trying to kill me!’”

Boleyn reportedly received $33,000 for the demo, and negotiations with Geffen began. Meanwhile, the band were busy auditioning guitarists when a certain struggling young actor strolled into the room. “It’s real strange, man. Johnny Depp just bought his own fuckin’ island, and he was one of our guitar players,” Jukes recalls.

Depp joined Rock City Angels in 1987. Durango and Panik already knew him, as his old band, The Kids, had played with The Abusers back home in Florida. But to Jukes he was just another actor playing rock star. “Initially when they told me he was an actor I didn’t even want to see the guy,” he remembers. “I was like, ‘Oh, another fucking actor.’ When you live in LA you get sick of those bastards. I didn’t buy into him at all. But after two rehearsals he really impressed me. He really played some cool, outside shit on his guitar.”

Depp’s tenure in the band was short-lived, however. In less than a year he left to pursue acting full-time. “He was in the band for about six months,” Jukes says. “It’s funny, he never really talks much about being in the band, and what I deduct about that is that he did a lot of drugs back then, and I don’t think he’s particularly proud of that period of his life. He was really a musician that fell into the acting thing, though. In a way, I feel kinda bad for him, because I don’t think he could ever go back into music and be accepted as a real musician. I remember him being frustrated about the whole acting thing. He needed the money, though, because we were all broke.”

Luckily, their lean days were nearly over. Geffen signed the band in 1987 for a jaw-dropping amount of money – one of the biggest rock’n’roll paydays of the 1980s: “It was $6.2 million dollars for a seven-album deal.” Jukes chuckles. “I know, it’s nuts. We couldn’t believe it. I think one of the main reasons that we got that kinda money out of ’em was that our lawyer was Steven Weiss, who was Led Zeppelin’s attorney for most of their career.”

The Angels received enough cash to strut around LA like rock’n’roll royalty for a few months. But they were soon flown out to Memphis to work on their debut album, Young Man’s Blues. Theories abound as to why the hottest band in Los Angeles were suddenly posted to Tennessee for almost 18 months, but most are crackpot. Contrary to the prevailing mythology, it was not so that Guns N’ Roses’ ascent to arena status was assured without having the Angels around as competition. And David Geffen already had more than enough money, so any tax write-off scheme is equally as ludicrous.

According to Jukes, the reasons were much less cloak-and-dagger and much more practical: money and drugs. “For one thing, it was cheaper to live in Memphis. If we weren’t gonna tour, and we were just supposed to sit around and write some songs, then our money was going to go way further in Memphis than it would in LA,” he explains. “And number two, to be quite honest there weren’t nearly as many drug connections.’”

The label hired a doctor to clean up Durango, and for a time it worked. The band spent a year writing and recording, and emerged with enough material for a double album. Young Man’s Blues (the first two-disc debut in Geffen Records’ history) was released in 1988, and the band immediately hit the road opening for Jimmy Page. Life was good. Until it wasn’t.

“It was a little Spinal Tap-ish out there,” Jukes recalls. “We kept playing in all these towns, trying to support this record, and it just wasn’t in the stores. I didn’t get it. They spent all this money on us, you’d think they’d make sure they promoted us so they could make their money back. Now that, right there, all those rumours about Geffen shelving us to keep us out of the way, it suddenly looked like it might hold some water. Because why else wouldn’t they have out damn records in the store? What the fuck?”

That was the beginning of the end of Rock City Angels. Geffen never released a second album. Jukes never got a straight answer from the label about it, either. With no other viable options open to them, the Angels booked themselves a tour of Japan in 1990 – and promptly broke up on the way home. But just like Jukes says, this shit just don’t go away. The timeless bluesy glam of Rock City Angels is finally receiving the attention it deserves. Gott Discs reissued Young Man’s Blues last year, and the band plan on releasing many of the unheard Memphis demos soon. There’s even talk of reunion gigs in spring 2006 (no word on whether ol’ Johnny Depp will make an appearance, but with this band you just never know).

This feature was originally published in Classic Rock 90, in March 2006.