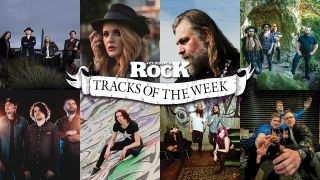 If there's one thing we've learned over the last couple of weeks, it's that you can't keep rock'n'roll down. Plans have been scuppered and lives overhauled, but quality new songs and initiatives have just kept on coming. For those about to rock, and who already have rocked in style, we salute you.

Last week our TOTW poll was topped by the mighty Massive Wagons, followed by the dapper Fantastic Negrito in second place and the excellent Larkin Poe in third. Well done to all three of them! Enjoy a spin of our winners' track (as they'd say, we're 'in it together' after all), then check out this week's selection and vote for your favourite at the foot of the page.

Dive in and get yourself some tunes.

The Aussie rockers have raised their game nicely on this gutsy new number. Think stompy, Stones-y swagger with a side of woozy psychedelic boogie that you just want to bite into...which you can’t. You can, however, listen to it. So go ahead and do that, and be happy. There’s a new album coming later in the year, so watch this space.

Fans of Beth Hart’s rock n’ soul vibe would do well to check out Elles Bailey. The Brit singer/songwriter is on smooth, bluesy form here, creating the sort of sultry atmosphere that’d work great in a jazz club with some sort of sophisticated bourbon cocktail (no umbrellas). Like what you hear? She’ll be touring later this year.

The White Buffalo - Faster Than Fire

An appropriately...well, fiery barnstormer from Jake ‘The White Buffalo’ Smith now – a rugged, barrel-chested ball of acoustic strumming and thoughtfully deployed electric chops – inspired by the fires that ravaged California in 2018. “It’s an unflinching look at the merciless power and speed of Mother Nature and the destruction she brings,” he says. “How in a moment lives and dreams are changed forever.”

This is the sound of what might’ve happened if Clutch got a bit stoned with Audioslave and Zakk Wylde – and then jammed late into the night. Like what you hear? You’ll find this and more on their upcoming album, Eden. Plus they go on tour with Ryders Creed later this year. Check ‘em out.

Fallen Temples - As Long As I Can Stand

Need some protein in your diet? Fallen Temples have an entire steakhouse's worth of the stuff in this lip-smacking slab. Not that it's neanderthal beefcakery – far from it. Marrying the moodiness of Rival Sons with the ballsy oomph of Monster Magnet and Clutch (even a whiff of Ghost in the closing twin-lead section), this is hard-grooving stuff that'll put hair on your chest and a stomp in your step.

Like a lot of musicians at this time, Matthew Joseph Hughes (aka the voice behind Bowie tribute-turned-standalone band Atari Ferrari) is keeping busy  by writing some new tunes. A whole album's worth, in fact, under his similarly glam pop-rocking alias Automatic Shoes. This super-sweet masterclass in beautifully crafted pop rock balladry makes a great first impression. A sparkling pocket of melodic introspection.

Download the album, No More Heroes, and get all 19 Automatic Shoes releases with a 45% discount.

We're picking up the pace now with The Blood Moon Howlers; a California-based foursome dealing in swampy, burlesque-infused blues rock, complete with velvety-smooth vocals and brassy blasts of raw soul. The West Coast by way of New Orleans, if you will. We like.

Pick up music and merch

Let's head back across to pond to Glasgow, with this week's chest-swelling closer. Soaring in the verses and boot-stompingly heavy in the chorus, it's the sort of catchy, modern rock that blends mainstream-beckoning flavours of Biffy Clyro, Don Broco and Broken Witt Rebels. Did we save the best for last? Your vote will decide.

Find more on Spotify I Check out updates on Facebook