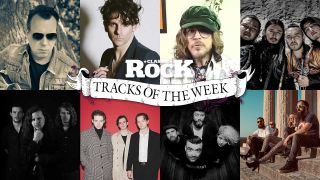 Congratulations to Joyous Wolf who picked up the most votes in last week’s poll with Odyssey, followed by Palaye Royale in second place and Ed Sykes and The Sonic Oscillators in third. Well done to all three bands on quality entries!

Check out JW’s winning single below, then see what you make of this week’s selection and vote for your favourite at the foot of the page.

More typically found playing guitar with melodic rockers FM – or trading licks with Bernie Marsden, among other side gigs – Jim Kirkpatrick proves himself to be a pretty handy singer too on his new solo single (also the title track on his upcoming solo album). A juicy barrelful of strutting, toe-tapping blues rock, its crowning glory is that sweetly harmonised chorus. Fans of Richie Kotzen and Kris Barras, as well as more old-school bluesers, will love this.

Low Cut Connie - Stay As Long As You Like

Adam Weiner’s gorgeous piano ballad builds on the promise of Beverly (the tender portrait of a troubled soul living on the fringes of society, and highlight of 2018’s Dirty Pictures: Part 2). Dreamy, soulful, heartbreaking, uplifting… it’ll make you feel a lot, in the best way possible. "I had Amede Ardoin on my mind with this song," explains Weiner. "He was a Black Creole musician 100 years ago who had the most soulful, spine-tingling voice imaginable. He suffered greatly and sang joyful music with a slice of pain shot through it.”

Echobats - Save Me From Loving You

Our favourite Mongolian throat-singing, horse head fiddle-brandishing mavericks have been keeping busy (they were originally stranded in Australia, where their tour was cut short by Covid19, but have since made it back home), starting work on a new album and putting together six bonus tracks for the deluxe edition of last year’s The Gereg. We love this flute- and fiddle-led swirl of meditative ancient textures and campfire folk song sensibilities.

Mother’s Cake - Crystals In The Sky

Madcap psych-rock antics and homespun flying machines now, from Austrian power trio Mother’s Cake. Mixing the groovy stonerisms of Crobot with angular alt-rock jibes and a forestful of magic mushrooms, it’s the sort of invitingly weird shit we have a lot of time for. To tune in is to trip balls.

Check out music and band updates.

The Doncaster-born trio’s new single opens with a heady mix of Tom Waits, Iggy Pop and IDLES flavours, before growing into a galloping frenzy of guitars and pounding drums. “This song is about a disturbed introvert's conversation between him and himself, whose need for isolation has reached its peak,” they explain. “No longer does he simply keep the blinds drawn to appease his twisted and paranoid appetite, for slowly he begins to talk through his methods in order to reassure himself that his actions are completely sane.”

Pre-order Fantasies Of A Stay At Home Psychopath.

Ekko Park feat Grant Nicholas - All Eyes On Me

The Kiwi rockers are joined by Feeder main man Grant Nicholas on this biting, dark-edged headbanger. “All Eyes On Me was a reaction to me sitting in an airport bar and watching the very same news story being played out on four very different networks," explains singer Joe Walsh (no, not that Joe Walsh) "....four different tv screens....four different truths....and every eye in the bar transfixed....I felt like an extra in Black Mirror or a living breathing Orwell novel….”

We're rounding off this week's feature with the introspective but uptempo new single from this British foursome. Candy is way less sugary than its namesake; by turns gnarly, melodic and blissed-out, like Gwen Stefani fronting a super-slick modern alt-rock band. Nice.

Check out band updates and music.