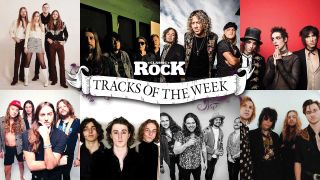 When we weren't falling into chocolate egg-induced comas and baking ALL THE THINGS this bank holiday, we were relishing the ongoing multitude of new rock-based goodness filling our ears – as bands continue apace with new music and lockdown-inspired jams.

Last week These Wicked Rivers emerged victorious in our poll, followed by Automatic Shoes in second place and Fallen Temples in third. Well done to all three of them! Check out TWR's winning track below, then get stuck into this week's selection - not forgetting to vote for your favourite at the foot of the page.

Get ready to party like it’s 1973 with this jet-propelled single from Blues Pills’ forthcoming LP, Holy Moly. Things might look different on the outside (original bassist/resident non-Swedish native Zack now plays guitar) but inside it’s all wah-soaked grooving, kaleidoscopic filming and 60s/70s wardrobe choices. It’s the Pills you knew and loved, essentially, but stronger and much more confident.

You might recognise Dom Mariani as the frontman of Aussie garage rockers The Stems, or 90s power-pop group DM3. Either way, he’s got form on the songwriting front, which translates beautifully into his new record with Datura4. This latest single – a filthy yet brightly melodic swirl of woozy 12-bar blues and stompy psychedelia – harks particularly strongly back to his bluesy, full-tilt boogie roots.

The band name is seriously deceptive, especially on this title track from the Arizona rockers’ upcoming album. Cooking up an inviting feast from flavours of The Cult, Led Zeppelin, The Killers and more, Sunshine does what those bands’ biggest songs did: puts the song ahead of any showboating.

“Musically we show the direction of the album all in a single track,” guitarist Sebastian Danzig says of this, the title track from the Vegas rockers’ upcoming LP. “The vulnerability, the truth and the aggression all wrapped together in a three and a half minute track.” A punchy, grandiose mix of sweeping electronics, metallic atmosphere and vocals that say ‘slick pop star’ one minute and ‘feral insurgent’ the next, it makes a tantalising introduction.

Pre-order The Bastards and check out more on Palaye Royale

Of Limbo - My Kind Of Girl

Initially conceived by brothers Jake and Luke Davies in Australia – before they upped sticks to California and hooked up with bandmates Rob Graveley and Christopher ‘Bug’ Bristol – Of Limbo play the kind of rock’n’roll that’s so saturated in swagger it can barely lift its Cuban heels off the beery bar floor. Also they rhyme ‘flat-chest’ with ‘voluptuous’... Semantic affront? So wrong it’s ingenious? The jury’s out here.

Naked Six - Outside Looking In

The introspective new single from the Manchester-based trio comes with brooding keys, psychedelia-dusted guitars and the sort of saxophone flourishes that call to mind Dark Side-era Pink Floyd. “Out of all the tracks on the record, this one is special to us, it’s the trick we held up our sleeve,” singer/guitarist Seb Byford says. “Lyrically and musically, it’s definitely the one we connect most with, it’s got a more dreamy, mellow feel to it.”

The vivacious latest single from Novatines sounds rather like something Nirvana and Led Zeppelin might have dreamed up – with added sprinkles of sweet vocal-harmony sunshine. Ever wished you could have all the good shit from the 90s and 70s in one neat package? Look this way.

Buy music and merch I Check in for band updates

OK, so this clearly isn’t a new song but it did make us very happy, so we hope it will do the same for you. What’s impressive is how Messrs Spiller, Slack, Elliott and Davies make the Spice Girls classic sound like their own song, retaining the sugary sheen of the original and mixing it with bright, Supergrass-y guitars and Britpop vibes. Best enjoyed while doing The Dance. You know you want to…