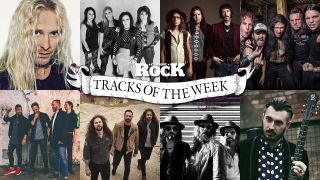 Happy Monday folks, and welcome to another round of Classic Rock's Tracks of the Week. With various classic veterans bowing out this year there's never been a better time to invest in the newer bands you enjoy – maybe you'll find a new favourite in this list, or rekindle your fondness for an existing one? But first let's take a look at last week's top three, in reverse order:

Congratulations to the boys in SKAM! And bravo to Royal Republic and Tremendous on quality second and third place tracks. Now, time to get stuck into this week's round-up, and don't forget to vote for your favourite at the foot of this page. Before all that, however, let's have a victory spin for last week's winners SKAM. This is Bring The Rain...

The Mute Gods - One Day

Having moved from pop-stardom with Kajagoogoo through various other projects, an A&R career and virtuosic bass/Chapman stick work for Steven Wilson and Steve Hackett, Nick Beggs could never be accused of leading a dull life. He’s also found time to put out three records with progressive rockers The Mute Gods, and this colossal, driving highlight from the latest, Atheists & Believers, (co-starring Rush's Alex Lifeson) is one of the biggest hitters they’ve written (whether you're a prog-head or a just like good rock music, you'll enjoy this).

The British rock foursome have upped their songwriting game on this upbeat, classy new single – with sunny 90s pop rock streaks mingling with a classic rock undercurrent (peaking with some tasty soloing) to sweet, flattering effect. Like what you hear? Check out more on their self-titled debut album, which is out in May.

The Brooklyn trio are back with this punchy, distorted taste of their new EP 100 Arrows. Pegged on a dirty, hard grooving boogie and layered chorus harmonies, it sounds like something you could’ve unearthed from a stack of lost 70s gems (the good kind, not the kind you ship straight off to a charity shop).

The Treatment - Hang Them High

They’ve weathered more line-up changes than most of us have had hot dinners, but The Treatment come out fighting with this meaty, Airbourne-esque classic rocking slice from latest album Power Crazy. Like your rock straight-up, three-chorded and instantly familiar? Look this way.

Canadians love rock’n’roll and ice hockey like Americans love peanut butter and jelly, and Monster Truck are no exception (I saw my first hockey game, a robust Nashville Predators showdown, with singer Jon Harvey and can confirm this). If any track was tailor-made for bellowing out in an arena, while watching dudes zoom around and beat the shit out of each other ON ICE, it’s this one; a king-sized dose of rollicking rock camaraderie.

The Nile Deltas - Dust Me Down

Some great fat Southern-fried slide n’ Hammond action now from...erm, the UK actually. Vocalist Craig Blencowe cuts through it all with big soul dude pipes, and the whole thing smacks satisfyingly of The Black Crowes, Blackberry Smoke and their kind. We’ll take it.

Dulcet, chipper heartland rock'n'roll is the order of the day with this new single from Aberdeen marine-turned-rocker Nicky Aiken and his Temple Sons. If you enjoy the rootsy revivalist likes of The Temperance Movement, this lot will be right up your street. Find more on their new EP, of the same name, which is out now.

Krissy Matthews - Level With The Devil

We’ll leave you today with this tune from British-Norwegian singer/guitar-slinger Krissy Matthews. OK we did cringe slightly at the line ‘I spent an hour and a quarter makin’ love to his daughter’ (a little on the punctual side, no?) but Level With The Devil is still an upstanding slice of swaggering blues rock, and Krissy’s got a mighty slick set of chops up his sleeve.