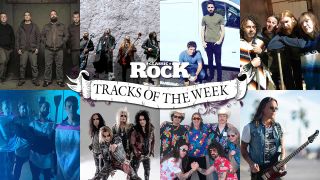 Greetings good peoples, and welcome to the latest edition of Classic Rock's Tracks Of The Week. So much music, so little time but we've combed through as much as humanly possible and reckon we've got a pretty appetising list to tempt you with. But first let's look at last week's top three, in reverse order:

3. Dinosaur Pile-Up - Round The Bend

1. Redd Kross - Beyond The Door

Congratulations to Redd Kross, comeback kings and now TOTW winners! And well played to Novatines and Dinosaur Pile-Up for highly respectable second and third places. You've all done marvellously. Now let's see who emerges victorious from this new stable of noble rock steeds, right after a victory spin of Red Kross's champion track. Dig in y'all...

Start your week right with Clutch’s blazing take on Howlin’ Wolf’s blues relic. Re-fired and pimped up with tasty soloing from Tim Sult and full-pelt rage from Neil Fallon (taking the ‘howling’ of Howlin’ Wolf, and shooting a few thousand volts through it). They’ve recorded this and other new tunes since calling time on their last tour, so expect more where this came from...

When this came out on Friday, a large portion of the Louder office promptly declared it their new favourite song, so it seems only right to include it here. The Mongolian mavericks’ overall look and vibe screams ‘metal’, but Shoog Shoog - their most more-ish tune yet - is all about the rock, completely with steely vibes and lyrics in their native tongue (though the title, and chorus refrain, is gratifyingly easy to sing along to).

There’s a darker, rootsy blues rock streak to the Welsh brothers’ new single (part very early blues hoodoo, part cool contemporary garage), propelling their reputation for hooky bluesy goodness to intriguing new ground. Like this? Check out more on the upcoming album, Smartphone Rabbit Hole, which is out in September.

The Bath rockers come bearing good cheer this grey, rainy Monday – in the form of the chipper latest cut from forthcoming album On Safari. It’s the kind of rollicking yet bang en-pointe pop rock (with bittersweet shades of nostalgic psychedelia) that could’ve easily come from the 90s, but slips down a treat in 2019 as well.

Reaching confidently beyond the ‘reggae-rock’ tag that initially defined them, Lionize have made the most politicised music of their career - and, if this first single is a reliable indication, it’s worked really well for them. Blisteringly urgent and instantly likeable (and inspired by a real news story about ‘the world’s loneliest whale’). It’s good to have them back.

The Swedish sleaze pioneers who kicked down the door for H.e.a.t and Santa Cruz have released a fierce, moody fistful of 80s power rock’n’roll. Heavy, hooky and debauched, not unlike a gritty, Scandinavian KISS or Skid Row. And yes, they spoof that Chris Holmes video. Check out more on new album RUST – their first studio record in six years – which is yours to own in September.

Glitter Wizard - A Spell So Evil

San Francisco’s oh-so-70s freaks manage to both shamelessly mine the past and give it a zesty kick up the arse. Their PR plug, “just imagine a (killer) glam rock girl band taken over by a bunch of half-dead wizards…”, is pretty spot-on, too. Expect glitter, capes and absolutely nothing you’d anticipate seeing or hearing in 2019.

If you like the driving, melodic highs of Joe Satriani’s catalogue (Motorcycle Driver from 1992's The Extremist springs to our mind, but you could easily cite various others), you’ll love this instrumental display of soaring guitar virtuosity from Danish guitar-slinger Soren Anderson. You may recognise him from Glenn Hughes’ or Mike Tramp’s backing bands, but City Of Angels suggests he doesn’t mind occupying the main spotlight either.