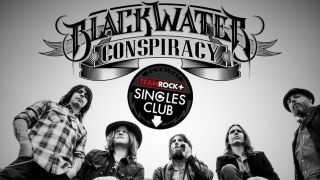 The second Singles Club of the week comes from a band profiled in this month’s Classic Rock, featured on the CD and appearing at Ramblin’ Man Fair this summer: Blackwater Conspiracy.

‘Ere: I recognise some of these chancers…

You might do: formerly known as Million Dollar Reload, the band were raved about a few years back and even had their debut album, Anthems Of A Degeneration, reissued by Classic Rock’s short-lived record label Powerage back in 2010. After three albums and an American tour, they felt like they’d taken it as far as they could, until a tour with Blackberry Smoke rekindled their enthusiasm.

No. Blackwater Conspiracy could easily be mistaken for one of the many Black Crowes splinter projects: southern-fried roots rock that’s all about the songwriting and musicianship. It’s good to have them back, no matter what they’re called.

TeamRock+ members can click the link below to download a MP3 or WAV of Monday Club, from their new album Shootin’ The Breeze. If you can’t see the link you’re either not signed in or not a member. Take a free trial to get access to all of the latest issues of Classic Rock, Metal Hammer and Prog, plus thousands of archive stories from the world of rock and metal.