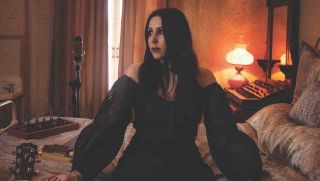 Chelsea Wolfe has understood the power of words since she was young. Troubled by insomnia and sleep paralysis, she’s found refuge among books and uses witchcraft and the tarot to guide her on the road. In recent years, she’s swapped LA’s bright lights for a more peaceful life in the Californian countryside, harnessing that serenity in the stripped-down acoustic sounds of her 2019 album Birth Of Violence. Although a very private person, she shares some of her philosophies on life.

Witchcraft helped me find myself

“It’s definitely misunderstood and something that I have been into for a long time, but I’ve been talking about witchcraft more openly recently. Birth Of Violence is tied to that awakening in myself and I wanted to share that with anyone else who might be feeling that kind of nudge inside themselves as well. There’s something in witchcraft that we call ‘shadow work’, which is basically confronting the darker parts of yourself, or the world. I realised that a lot of my songs were doing that anyway. A lot of witchcraft is about becoming more in-tune with your intuition and putting that into whatever you’re doing creatively.”

“When I was in my early 20s, I was gifted an Art Nouveau tarot deck. At first, it was just about the art and then I started wondering what the cards were actually for. It’s called divination, but tarot is more about giving clarification of the present and I use it a lot on the road if I’m having a difficult time or I need to make a decision. I’ll pull a card or do a spread and it will give me some insight and perspective. The two decks I’ve been using lately are The Bad Girl deck by Katie Skelly, which is really cute and kind of fun, and another deck by an artist named Caitlyn Madison. I think it’s really cool that nowadays, artists and witches are making tarot a lot more modern and inclusive.”

Feminism is the key to my work

“I’ve never really felt connected to society’s view of what a woman should be or should look like, so I’ve always made my own definition of feminism. For a long time it was in a very androgynous way, but as I got older, I’ve felt more connected to being a woman. I think a lot of that has to do with me moving back up north, near my hometown, and becoming more comfortable with myself as a person: that feeling of being more connected to being a woman just came naturally. I think I’m always trying to find the balance between softness and strength because both of those exist within me and within all women.”

“A lot of artists are embracing mixing genres, and not just being ‘a rock artist’ or ‘a folk artist’. We can be both things and incorporate whatever we want in our music. That’s the future: combing elements that don’t sound like they work together. I’ve always felt that if I was gonna pursue music, it’d be on my own path and I wasn’t going to be in some sort of box.”

“I’m a pretty private person, so it’s very important to me to work with other musicians that I trust and that I feel comfortable being myself with. When I met [long-time collaborator] Ben Chisholm, we just found we made music together really well. My drummer Jess Gowrie is someone else I’ve known for well over 10 years. I feel lucky to have found people that I have that musical connection with. We’re very much a tight musical family and it’s been so lovely playing with this group over the past few years.”

I love working with my heroes

“Deftones are one of the most influential bands for me. I love the music, so it was really special to collaborate with Chino Moreno[’s side-project, Saudade] on Shadows & Light.  I got to meet him in person at a festival I played. He’s wonderful, it was like meeting up with an old friend. He’s a lovely person and I’d like to work with him again. I don’t have any specific plans but his voice is one of my favourites so it’s in the back of my mind, for sure.”

Sleep is so important

“My sleep paralysis really got heavy when I was living in Los Angeles and I didn’t really have the tools back then to protect myself, or I didn’t really recognise my sleep paralysis as much. When I wrote Abyss, I was writing from that liminal space between being asleep and being awake in a more purposeful and conscious way. Insomnia is also something that affects me and if you go for a few days without sleeping well, you might as well drink a whole bottle of Jack Daniels! Now I’m at a stage where I can understand what’s happening pretty quickly and talk myself down, but it still affects me physically.”

I need space to thrive

“A few years ago, I moved up near the mountains, about an hour north of Los Angeles, to get a sense of if I could live outside of the city. At first, the quiet was overwhelming and I couldn’t handle it but, after a while, I realised it was good for my sleep paralysis and good for me as a creative person. I got a lot more work done because I was living without so many distractions. More recently, I found a little house in the woods, at the base of the Sierra Mountains. Now I’m out here, I can’t imagine ever living in a city again. It’s such a great contrast to touring, too, and it’s a really good place to process everything.”

Mental health is a priority on tour

“After about eight years of the constant cycle of packing and unpacking, I started to feel like I was losing my mind a little bit. Now I have a lot more tools to keep me sane on the road. Meditating is something that can bring you a little peace of mind; just taking a few minutes out of your day to find a quiet place alone is great. I’ll pull a tarot card and just light a candle to spend some time with my spiritual practice. It’s definitely helped. I definitely enjoy the rock’n’roll side of things too, but I’m able to take breaks from drinking when I’m not on the road. I’ll still have those nights where there are a lot of people backstage after the show, socialising. Sometimes you need a little bit of something to keep you going because you just gave all of your energy to the show and now you want to give all your energy to your friends and the people who’ve come to talk with you afterwards.”

I’d love to score a movie

“Hearing [Feral Love] on the trailer for the fourth season of Game Of Thrones was really exciting. I don’t watch a ton TV shows, but
I loved Game Of Thrones. I think a lot of those new TV shows are just as good as films so it’s really been exciting for me. A big dream is to do an original score for film or TV so it was a tiny slice of that. I’ve always written in a cinematic way without thinking too hard with it. Often, when I’m writing, I’ll be playing guitar and singing with my eyes closed. I’ll have visions of perhaps a landscape or something specific, like colours or movements. I think a lot of the people I work with write in the same way. Ben is also very cinematic in his thinking and his productions.”

Happiness can be found in a good book

“When I was in high school, I worked in a used bookstore. I’ve always been a big reader – the library was my favourite place as a kid – and as a teenager working at the store, I discovered books like Wuthering Heights and Grapes Of Wrath. I love the smell of old books and I was always drawn to these big, heavy titles; when the title of the Birth Of Violence came to me, I thought it seemed like something I could have found it on the shelf of a used bookstore. Nowadays, I read more non-fiction. I’ve been throwing myself into studying more so I’ll read books on healing, herbalism or witchcraft.
Carl Sagan’s essay The Pale Blue Dot was a big inspiration for me on [2015’s] Abyss. I had that printed out and would read it while I was working. On [2017’s] Hiss Spun I was exploring why I’m so drawn to white noise and I read something from Carl Sagan about that. He said that about 1% of radio and TV static is a relic from the Big Bang. That’s just such a touching epiphany.”