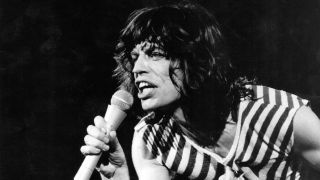 As one of rock's leading front man, Mick Jagger has no equal. As a singer, Jagger has also constantly proved his worth adopting a variety of styles – encompassing rock, blues, soul and country.

His diverse vocal delivery has been responsible for The Rolling Stones making some of the finest records ever made. Here are the ten best Mick Jagger Rolling Stones songs.

In which the Stones bring blues to the mainstream. This uncommercial offering was something of a brave move and a deserved number one hit in 1964. Over an incessant slide guitar groove, Jagger slithers around this Willie Dixon tune with a brooding mournful vocal (‘’hounds begin to howl’’) that simply never lets up. Groundbreaking.

He’s got the blues, he certainly has the soul and this track from the classic Exile On Main Street is a perfect example of the way Jagger can weave a lyric with Marvin Gaye like elegance. There’s a blissed out delight to the rasping and gasping quality of the vocal on this gospel tinged outing.

From the much maligned psych induced Their Satanic Majesties Request album, Jagger brings a natural empathy to a joyful lyric. He totally loses himself in the song as each colour of the spectrum is dutifully observed. The end result is gloriously uplifting.

This shocking tale of debauchery and lust is brought vividly to life by Jagger’s leering vocal delivery. ‘’There’ll be a feast if you just come upstairs - it’s no hanging matter, it’s no capital crime’’ he defiantly sneers, an invitation that groupies around the globe evidently found hard to resist.

The closing track to the seminal Sticky Fingers album saw a Keith-less Stones take on a song of soaring beauty. Aided by a gracefully string arrangement, Jagger twists and turns his way ‘’down the road ’’ with a vocal delivery of heart rending clarity - totally befitting the song’s reflective tone.

Proving he can apply a little tenderness when required, the usually macho Jagger goes all dewy eyes on this piano led ballad from the Goats Head Soup album. As for the subject matter, the smart money was on Angie Bowie - whoever it was, in 1973 it provided the Stones with another smash hit single

3) You Can’t Always Get What You Want

On this lengthy epic from the Let It Bleed album, Jagger brings a plaintive touch to a narrative of missed opportunities – his sympathetic story telling style is totally in keeping with the song’s theme of regret and remorse. The London Bach choir are a suitably stirring addition to the proceedings.

A vocal performance dripping with pure emotion. Jagger and co go all country on a Gram Parsons inspired tale of star-crossed lost love. Being Jagger, it’s never simple when it comes to the ladies, the regretful stance of the lyrics could have been aimed at Marianne Faithful or Anita Pallenberg. He gets around does our Mick…

1) Sympathy For The Devil

To say that Jagger totally owns this song is an understatement. He literally is the devil as he unfolds Lucifer’s fierce intent with unnerving menace. It’s Jagger’s relentless drive that pushes the performance of the whole band to the limit, reaching a breathless demonic like climax. Provocative in the extreme and utterly captivating.