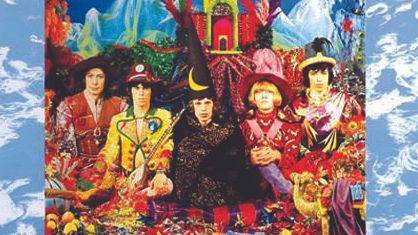 No album in the Stones’ vast canon has incurred such abuse as Their Satanic Majesties Request, including from the band themselves. Inevitably and lazily considered to be their dark-side retort to The Beatles’ Sgt. Pepper, the album was more an acid-fried dispatch from the Stones’ besieged front line, reflecting their annus horribilis of drug busts, managerial upheavals and Brian Jones’s deteriorating condition exacerbated by losing Anita Pallenberg to Keith Richards.

The Stones themselves ain’t involved. So, in contrast to the expanded feast that accompanied Sgt. Pepper’s 50th, it remains in its original 10-track form with new stereo mix joining last year’s mono box overhaul. The lavish packaging replicates the original 3D cover shot.

Experienced in new crystal clarity half a century later, TSMR can be appreciated as a spangled embodiment of that technicolor year and fullest manifestation of Brian’s ever-questing sonic spirit, upgrading the psychedelic jam of Sing This All Together (See What Happens) from wankered self-indulgence to fearless avant garde exploration. Timeless highlights include the towering clang of softwareuiphraseguid=“5ad537af-a5e0-45d4-8ffc-903404e3b0a9”>Citadel, kaleidoscopic love bomb She’s A Rainbow, eerie Lantern, enigmatic 2000 Man and mind-blowingly desolate 2000 Light Years From Home (Jagger singing words he wrote while locked up in Brixton nick).

Deep beneath the heady swirls of percussion and lysergic exotica, Keith and piano maestro Nicky Hopkins can be heard working up the scabrous blues-power that would ejaculate Beggars Banquet and lead the Stones to inventing modern rock; repositioning TSMR as vital stepping stone to their omnipotent next phase.