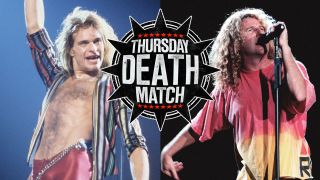 The current issue of Classic Rock features a look back on the making of Van Halen’s landmark 1978 debut album. Which got us thinking – was Dave Lee Roth a better frontman than Sammy Hagar, or did the Red Rocker have it over Diamond Dave. There’s only one way to find out – get a pair of CR scribes to duke it out. In blue corner, Paul Elliott makes the case for Dave Lee Roth.

It happened thirty years ago, but I remember it like it was yesterday. In 1985 I was an A-level student, and it was a friend from college – Graham Stroud – who broke the news to me in a phone call one weekend.

“Are you sitting down?” he asked. I said I was. Then he told me: “There’s bad news, and there’s really bad news.”

“Dave is out of Van Halen.”

This wasn’t bad news. It was a disaster. This was my favourite band he was talking about, and a big part of what made this band so great was the singer. Yes, it was Eddie Van Halen’s band. Eddie was the greatest guitar player on Earth, and the band was named after him and his brother Alex, the drummer. But Van Halen without David Lee Roth? That was unthinkable.

Diamond Dave might not have been a great singer in any conventional sense, but he was perfect for Van Halen. He couldn’t hit the notes that Ronnie James Dio could, but his whiskey-and-cigarettes voice oozed rock’n’roll attitude. And as a rock star, Roth was pretty much in a league of his own. He was cooler, funnier and better looking than guys like Vince Neil could ever dream of being. As a frontman, only Freddie Mercury was better than Roth. Diamond Dave was like the quarterback and cheerleader all rolled into one. The sheer force of his personality was a big part of what gave Van Halen their edge over other arena rock acts. And now he was gone.

I was still in shock when Graham said: “Here’s the really bad news. Sammy Hagar is in.”

This really was too much. As far as I was concerned, Sammy Hagar was a total dick. Yes, he was brilliant in Montrose – on the first album, at least. And yes, I liked his song I Can’t Drive 55 – definitely the best thing he’d done as a solo artist. But while I could appreciate that Sammy was a good singer, there was a lot about him that I hated. In 1984 – as Van Halen and Dave had been riding high with Jump – Hagar had made an album V.O.A. on which he positioned himself as the Voice Of America. And what he represented, in the Cold War era, was the kind of hawkish bullshit that I despised. If Roth was an all-American hero, Hagar was an all-American bozo. And now, that bozo was going to ruin the band I loved…

Moreover, I have even grown to like Sammy as a person after interviewing him several times over the years. I’ve interviewed Dave many times too, and both he and Sammy were exactly as expected: loud, funny and opinionated.

But for me, Van Halen were never as great without Dave. In the band’s original line-up – the two brothers, Roth and bassist Michael Anthony – there was a magical chemistry. Every one of the six albums they made between 1978 and 1984 is a classic. There is not one bad song on any of them. Nothing from Van Hagar – not even the brilliant 5150 – can match what the band created in those six albums with Roth.

Many years ago, before Roth rejoined Van Halen, I received as a birthday present a t-shirt made by the singer’s fan club Roth Army. The back print stated in huge block capitals: DAVID LEE ROTH IS VAN HALEN. When I wore that t-shirt to a Def Leppard gig in California, I lost count of the number of people who said they loved the shirt and agreed with that statement.

I was shocked when Dave left Van Halen and I was shocked again when, after earlier false starts, he rejoined the band in 2008. It’s just a shame that Michael Anthony wasn’t invited to be a part of this reunion. Without that guy, something is missing. It’s like Black Sabbath without Bill Ward.

But on those first six albums, they got everything right. Roth once called heir music “turbo pop”. It was high-octane, testosterone-charged hard rock with killer tunes and a knowing sense of humour. And it was so much fun while it lasted. Van Halen with David Lee Roth – it’s what summer was invented for.

…And in the red (rocker) corner, Jerry Ewing comes out swinging on behalf of Sammy Hagar…

Was any Van Halen album that David Lee Roth sang on as good as the band’s electrifying 1978 debut? No.

Sure, Van Halen II, Women And Children First and Fair Warning are cool records. But is anyone other than the most foolhardy Diamond Dave zealot going to deny that Diver Down represents worthy evidence that Van Halen in 1982, fronted by Roth, were nothing more than a washed up, pale imitation of the incendiary band they once were.

They may have fluked a hit with Jump on 1984, but you listen to the rest of that album. Every damn song just peters out into a disinterested fade. Sure, there are some great ideas, killer riffs and cool choruses on offer, but the lack of impetus from the band in getting the job finished is all too evident. And given that a stack of ideas that had cropped up on early demos were even appearing on 1984 suggests they were a band fast running out of ideas and interest. And David Lee Roth was the biggest culprit.

Evidence you ask? The band’s performance at Donington in 1984, when they were widely expected to blow headliners AC/DC away. A chance blown with indulgent solos and Roth’s ego-run-wild raps between songs, allowing the headliners, themselves experiencing a creative lull, the chance to reaffirm their position as one of the world’s greatest hard rock acts. Little wonder it all fell apart with Roth within the year. Sure, early Van Halen with Roth on stage must have been a sight to see. But then people used to think The Darkness were an an enjoyable sight to behold!

Now Sammy Hagar – he’s got real class. Not the brash, glitzy, cartoon effrontery of Roth. He sang with Montrose. On their blistering 1973 debut album. An album Van Halen had largely based their entire career on. So with the cartoon Pinocchio of rock out the band, why not go for the original puppet master? Van Halen did just that. And they never looked back. For the next decade at least.

Sammy Hagar was the perfect fit at the perfect time for Van Halen. Unlike AC/DC, who’d brought in the relatively unknown Brian Johnson to replace the much-loved Bon Scott, and still reaped enormous commercial and creative dividends, the move by Eddie and Alex Van Halen after they’d be introduced by a garage mechanic was far more astute. Hagar was already an incredibly successful solo artist in his own right. An unknown in this instant could never have worked (see the sorry plight of the reasonably well-known Gary Cherone when he hooked up for the dire Van Halen III). Hagar was a star who could fill the boots of Roth. He’d already helped lay the blueprint for Van Halen, and perhaps most importantly, worked with Van Halen producer Ted Templeman on that Montrose album.

Except it went better than that. Hagar was simply a greater singer and better songwriter than Roth had ever been and the sense of excitement when I first heard the new-look Van Halen’s debut single Why Can’t This Be Love pumping out the radio was insane. The flood of delight at hearing it’s blend of Eddie’s dexterity and Sammy’s ear for a melody combining for the first time a release of gargantuan proportions. It’s the perfect Van Halen single, the subsequent album, 5150 the perfect summer metal album. It’s got everything – marrying the finest Van Halen had offered to that point with the class of Hagar’s exemplary solo career. And it rocks like a mother…

OU812 boasted the solid-gold gold chorus of When It’s Love. And it proved, as Roth’s own solo career (enjoyable enough when it started) began to tailspin into a free fall from which he’s never recovered, was that the Hagar fronted Van Halen were better, sold more records and were quite simply way more successful than they’d ever been with Roth at the helm. For Unlawful Carnal Knowledge is a monster of a record and won the band a Grammy. I saw them in Fresno on that tour. They made the 1984 Donington Van Halen look like a bunch of school kids. They repeated the feat in the UK a year later, and again in 1995 in support of the epic Balance.

It couldn’t last. Good things, goes the old adage, never do. Van Halen are a joke these days for many reasons, not simply because Dave and his dodgy barnet is back fronting them. But Sammy? He’s still cool. Because he hasn’t changed. The Hagar of Montrose and the early solo days was the Hagar of Van Halen, and he’s still the same Sammy Hagar today. Enjoying himself, playing his cool brand of melodic hard rock regardless of fashions. Hanging out with his buddy, the ever-likable Michael Anthony. Owning his own drinks companies Enjoying life. Winning. Every time.

**So who’s best? Is it Diamond Dave… or the Red Rocker? Vote in our poll below, and we’ll reveal the results in next week’s instalment of the Thursday Death Match. **