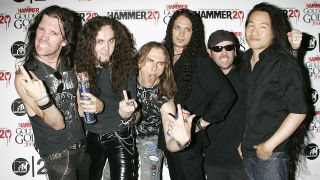 By the time Dragonforce went to work on their third album, 2006’s Inhuman Rampage, they were already scrambling up metal’s ranks. It was lead single Through The Fire And The Flames, however, that introduced a whole new audience – most notably a whole bunch of Guitar Hero III gamers – to the UK squad’s power anthems, weird noises and demented solos. Guitarist Herman Li remembers the track that made the band a household name.

People got pretty confused by the intro

“When we first started playing that song live we didn’t have any acoustic guitars, so we told the keyboard player to play the acoustic bit on the keyboard. So there was a confusion about the beginning for a year or two that the acoustic guitar on the album is not actually acoustic. But we just couldn’t be bothered doing it live properly for the first two years.”

It introduced our trademark Pac-Man sound

“I was messing around with that Pac-Man noise but never actually found an opportunity where I thought it would be cool to use it in a song. That was kind of the theme for the album; stuff we hadn’t done before that we hadn’t heard other bands do: these noises of retro videogames that we like. A guitar string also broke in the recording and we just left it there because we thought it was cool. It ended up being seven minutes long, and I guess it became our most famous song.”

“But he could still play. He always had at least 10 beers before a show back then, so it was nothing for him. Sam was controlling himself because it was our first music video, but then he couldn’t do it anymore and he said, ‘I’m going to get fucking drunk. I’m done standing around behaving.’ So he just started drinking. We left his drunkenness in there, and then it just became a thing for us: drink and shred.”

We weren't ready for that spotlight

“We’re musicians that never did music to be successful; we’re just doing it because it’s fun. When Through The Fire And Flames hit America, it was a whole different game. To be honest, we were not ready, and that’s one thing I’ve learnt. We were just a bunch of idiots at that time. We didn’t have the infrastructure of a professional, world-touring band. It all happened so quick. We had to jump on these tours and we didn’t have time to rehearse some of the songs as well as we should have. I’m just being honest here!”

Guitar Hero was a blessing and a curse

“People can use Guitar Hero to slag us off and say, ‘Oh it’s because of Guitar Hero that they got big.’ But to be honest, no, because we’d done a massive world tour before that game hit the store and afterwards it just carried on generating interest in the band. So it helped us but then I heard fans who were like, ‘I used to like you guys but not anymore because my 10-year-old sister was into Dragonforce too from playing Guitar Hero.’ You can’t win. But it made us a household name in a lot of countries and we got a platinum record for Through The Fire And Flames in America, with more than a million sold.”

“In 2015, on Full Metal Cruise, there was a pool in front of the stage, so I was like, ‘Let’s play it live in the pool!’ I was holding my breath under the water with the guitar floating above my head and just playing it. I thought, ‘We have to do something fun here.’ If we’re on a cruise and you see water around us, expect the unexpected.”

Dragonforce's latest Reaching To Infinity is out now and available to buy from Amazon.