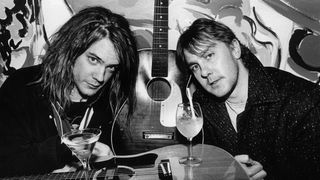 In 1993, the alternative rock movement was in full swing, encompassing dozens of shiny new microgenres, from the mellow, hippy stonerbuzz of Blind Melon to the arena-rattling supergrunge of Soundgarden; from the wounded moan of Nirvana to the powergrrrl roar of Babes In Toyland.

The Alternative Nation’s heart, however, belonged to Soul Asylum, a scruffy quartet of ex-punks from Minneapolis who, like their former labelmates The Replacements, played an infectious brand of melodic, hook-heavy roots rock that possessed a rugged, touching honesty and often wrapped its rough-hewn jangle in an uplifting message.

After toiling in the indie world and at the bottom end of the majors for nearly a decade, Soul Asylum finally broke in 1992 with their seventh album, Grave Dancers Union. It contained four charting singles when all was said and done, but its third, Runaway Train, a scuffling acoustic ballad about love and loss, became Soul Asylum’s defining moment.

According to frontman Dave Pirner, the positive reaction to Runaway Train was immediate, even before it was released.

“I think the song just kind of rolled off my brain,” he recalls. “Sometimes a song takes six years to write, and sometimes a song takes a half an hour. This just happens to be one that came rather quickly. I wrote it all in one sitting, and then I showed it to the band. They thought it was good. It was really the first time I wrote a song and people had an immediate reaction. I wasn’t sure why people were so taken aback by that song. I was too naïve to realise they were all seeing dollar signs. I just had never experienced anything like it.

“It’s very near and dear to my heart, and it’s a very personal statement, and I’m pleased that it’s not a silly pop song or anything like that. I think it’s ironic that something that could be considered disturbing or extremely depressing could ring such a universal bell. It’s good, in a way, that people identify with it, because to me it indicates that there’s people out there who don’t think they’re fuckin’ perfect, and everybody doesn’t have this smooth-sailing, happy-go-lucky existence.”

In 1993, when Runaway Train was released, a single’s success could hinge on a strong video. Eschewing the usual rock’n’roll clichés, Soul Asylum chose to deliver a message with their clip. The video showed photographs and names of missing children, and ended with a plea from Pirner: “If you’ve seen one these kids, or you are one of them, please call this number.”

Alternative versions were edited for other countries and other children, and in the end several families were reunited with their estranged kids.

Although runaway children was not what Pirner had in mind when he wrote the song, he ultimately saw the opportunity to do some good. “Whatever good came out of it I think is something we should be proud of,” he says. “They did a version in Canada, and they did a version in England, and it really kinda caught on in a public service announcement sort of way. Its heart was really in the right place.

“To me, I couldn’t believe you could actually transcend the music video and have it cross over into real life. It was a really cool experience to realise that – wow! – there is the potential for entertainment to have a positive effect on the real world. And that’s something that probably doesn’t happen enough. And it’s something that we just sorta came by, from Tony Kay, the director of the video, going “milk cartons, milk cartons”. We asked him what he was talking about, and he said: “The kids on milk cartons – we should try to find them.” And I was like, wow!” The video was such a radical concept that initially Columbia, Soul Asylum’s record label at the time, almost nixed the idea.

“You have a situation where people don’t even get it,” Pirner says. “They’re going: ‘This is supposed to be a promotional tool for your record; you’re not supposed to be making some sort of social/political statement here.’ And you’re like: ‘Yeah, but why don’t we try?’ You’re even dealing with adversity from the people you’re making it with sometimes. So we really slipped it around the system. I thought that was quite an accomplishment.”

Pirner is still involved with The Center for Missing and Exploited Children, the organisation with whom they worked with on the video.

The song made Soul Asylum superstars, if only for a little while. Grave Dancers Union ultimately went double-platinum, and the band rode the album’s success well into the 1990s, until they sputtered to a stop in 1998, exhausted and happy to get off the treadmill. They have since reunited, sadly without late founding member bass player Karl Mueller.

As for Runaway Train, it remains one of the most affecting songs from the alternative rock movement; a bright flash of hope that continues to help people find their way home even today.