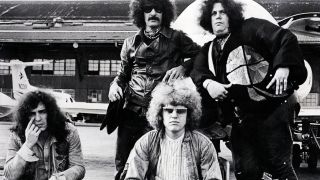 When Mountain went into the Record Plant studios in autumn 1970 to put the finishing touches to their second album, there were already mutterings within the camp that bass player/producer Felix Pappalardi and his girlfriend (later wife) Gail Collins were exerting a stranglehold on the band’s output. When the band played at the Woodstock festival in 1969, it was only their fourth gig together. Their debut album, 1970’s Mountain Climbing!, had been a pretty democratic affair, with drummer Corky Laing providing the initial idea for its hit single, Mississippi Queen, with cowbell intro and David Rea’s lyric.

The follow-up, Nantucket Sleighride, was much darker, with Tired Angels (a morbid, Lord Of The Rings-influenced tribute to Jimi Hendrix), the claustrophobic, curse-like My Lady and The Great Train Robbery, which depicted the infamous villains behind the 1963 heist as outlaw heroes.

Those tracks paled into insignificance next to the title track, a fictional account of a true episode involving 19th-century whaling ship The Essex, which left Nantucket on an ill-starred hunt that ended in cannibalism.

Leslie West recalls the song with mixed feelings: “Felix came up with the idea, and Gail wrote the lyrics. Owen Coffin was the youngest guy in the long boat they sent to harpoon the sperm whale. They got dragged out to sea and were close to starvation, so they drew straws, and the kid got the short one. They ate him. The term ‘a Nantucket Sleighride’ refers to the whale diving deep with harpoons in its back, then flying to the surface and pulling the long boats out at speed.”

Collins’s lyrics glossed over the grislier details but her subtext was ingenious. West: “The opening lines, ‘Goodbye, little Robin-Marie, don’t try following me/Don’t cry little Robin-Marie, ’cos you know I’m coming home soon,’ were about herself and addressed the fact that Felix was cheating with a girl called Robin-Marie. They had a weird dynamic, him and Gail, and I didn’t think much of it to begin with when things were great. Felix is talented, his wife writes the words, she does the artwork, she takes the photos of the group, designs the stage outfits, yada yada, and it’s all easy enough. Then it became too much. It was like when Yoko came along to The Beatles and Paul said, ‘Oh no.’”

Leslie wasn’t taken with the track. “I hated it at first because it was so fucking hard to play. There were intricate chords, not your usual four-trick pony, heavy riffs, a pretty section where Felix used a tiny keyboard like an accordion, and a recorder part for what shoulda been a flute in the middle eight. I was young and impatient at the time, and it was hard to learn the thing. It was more than your average classic rock blues song. Now I love playing it and I finish all my shows with it. Felix sang it originally. Sometimes I think of him. I never think of Gail.” West found it hard to relate to Nantucket Sleighride for other reasons. “I didn’t even know where Nantucket was! Felix and Gail were living there at the time, and he was writing a lot of stuff about Massachusetts, but I had no knowledge of the place or its history. So even while we were recording I was in the dark, especially in the studio where all the heavy sessions had to flow into each other.”

Under Pappalardi’s notoriously exacting instruction, the big man finally nailed it “when I came up with the riff in the middle. Then I was happier.”

West first heard the finished album in January 1971. “I was living in London at The Inn On The Park on Hyde Park and picked up a copy. I was so fucking pissed off! Gail’s name was all over the cover. Felix and her called all the shots. I was just the lead guitarist and sometimes the lead singer, but she was listed in so many different places it was ridiculous. Even on the cover art she drew herself – just like on the first album she painted herself standing in front of a mountain. I hadn’t realised it before, but then it hit me and left a very bad taste in my mouth.”

Nantucket Sleighride became a focal point of Mountain’s live set. “It was very popular; the big number, we closed the shows with it. It was a nightly jam, really. I wanted us to be like a heavy rock orchestra band, so I made my guitar sound like a violin, a viola and a cello.”

Sleighride became Mountain’s best-known song in Britain thanks to ITV’s current affairs programme, Weekend World, which used it as theme music, specifically a tub-thumping section that gives way to an organ motif played by the late Steve Knight. In the end Nantucket Sleighride would hold bitter-sweet memories for West, after Gail shot and killed Felix in 1983.

“There were terrible problems with heroin in Mountain. In the beginning they were a great husband and wife team, but when the dope started she got the hook in him and it was out of control. It went from really good to, ‘What the fuck is going on?!’ Heroin ruined the band for sure, and throwing Gail into the mix made it even worse.

“Hopefully the fans didn’t know about all that bullshit. But when you go behind the music and understand the power of the flowers of evil you see how awful it became. It took me years to recover from that period and it took a toll. I paid a heavy price.”

What Mountain Taught Me About Moby Dick