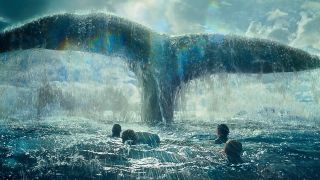 It’s amazing what you can learn from a piece of vinyl. A lot’s already been written about the tactile feel of it all - the deliberateness of dropping a needle on wax and absorbing yourself in a piece of music instead of letting it wallpaper something else you’re doing. This isn’t about all that. It’s about what those beloved, archaic objects can do to enhance your life-experience when you take the time to read what’s written in the liners, the track-listings, and the thank-yous.

Full disclosure: I listen to music pretty much every way you can get it, but there’s something to be said for something you can hold in your hand and study while absorbing that distillation of an artist’s intentions in high fidelity, and for me it all centres around a little detail I discovered while staring at a newly-purchased, heavily-worn imprint of 1971’s Nantucket Sleighride by Mountain, and for a month or so it’d become a Richard-Dreyfuss-Close-Encounters-making-mashed-potato-desert-mesa obsession.

Lots of people know what Nantucket Sleighride refers to, which is what happens when a panicked, harpooned whale drags a whaleboat full of crew over the waves toward an uncertain end. Horrific? Unquestionably. An undeniable fact of the world economy in the 19th century? You bet, and I should probably state here that I’ve donated to Sea Shepherd, whaling is a scourge on sentient beings who we share the planet with, and I’d never wish to condone that activity, but over 100 years ago the trade in whale oil was as big as an industry could get, and much of it centred around a little island off the coast of New England called Nantucket that could easily be referred to as the Dubai of its day.

I didn’t know any of that until I listened to Mountain, of course, because it was only when I picked up that actual record that I realised that the full title of that ghostly, haunting track with the weird middle-eighth is Nantucket Sleighride - (To Owen Coffin). ‘Who’s Owen,” I thought? A few google-searches later I discovered he was a crew-member aboard the doomed whaleship Essex, which was sunk by an enormous sperm whale in August of 1819, and would inspire Herman Melville to write Moby Dick, one of the greatest novels of all time. What I didn’t realise was that that incredible tale ends where the true, genuinely fascinating story of the Essex begins, which is how you survive in the South Pacific - this great ocean desert - without food, shelter, or land over a thousand nautical miles from the coast South America. In short: it’s ugly.

It’s a predicament that’s brilliantly rendered by Nathaniel Philbrick, whose 2000 book In the Heart of the Sea: The Tragedy of the Whaleship Essex provides not just a fascinating account of what happened to that horribly unfortunate crew. It’s also an incredibly vivid, historical account of a unique period in American history when whaling was booming, men sought their fortune on the high seas, and cannibalism was a taboo subject among seafarers who were a century away from the first marine radio and the concept of S.O.S. Grim doesn’t begin to describe the fate of shipwrecked sailors who’d sidestep the relatively merciful fate of drowning only to experience something far darker.

So, like a lot of people, I scratched my head when I saw that Ron Howard was working on a film-adaptation of the same story. Taken out of context, would it all seem like an endorsement of a practise that, incredibly, still exists to this day in some countries and has decimated a species to the extent that the giant sperm whales Melville wrote about no longer exist, and only smaller descendants swim the oceans today because their ancestors were less desirable?

It was a relief then to see that it was in no way glorified, but also made no moral judgement on a time when we knew less about what we were doing to the environment, and there’s little about a sailor’s day-to-day existence in the century to envy - it was a brutal affair, as deadly in its mundane toil as it was in its pursuits, and the fate of the Essex’s crew isn’t something you’d wish on anyone, whaler or not. More than that, it’s a film that’s in love with the sea’s vast expanses, and the magnificence of the creatures once hunted by the Essex.

I had a chat with Benjamin Walker about it all - he plays the Essex’s Captain Pollard in the film - and he seemed to agree it was a dark time in history, but one worth knowing and learning about. Turns out he’s a huge fan of Mountain, too - probably more into his Hendrix - ‘but hey, Mississippi Queen man!’ Check out the audio below.

And if you’re listening to records, don’t forget to check out the packaging - you never know the journey it may take you on. As for In The Heart Of The Sea, do yourself a favour and see it on the big-screen: it’s a story you won’t forget.

The Story Behind The Song: Nantucket Sleighride By Mountain