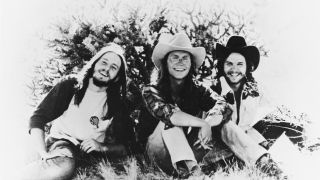 What price would any sane bookmaker offer on three American youths meeting one another in the UK, scoring a hit with a single that wasn’t even on their debut album’s first pressing, then becoming one of the biggest-selling acts of the 70s? Probably very long odds. But in fact it’s exactly what happened when guitarist/singer Dewey Bunnell, pianist/singer Gerry Beckley and guitarist/singer Dan Peek – all sons of US servicemen – crossed paths during the late 60s.

What price would any sane bookmaker offer on three American youths meeting one another in the UK, scoring a hit with a single that wasn’t even on their debut album’s first pressing, then becoming one of the biggest-selling acts of the 70s? Probably very long odds. But in fact it’s exactly what happened when guitarist/singer Dewey Bunnell, pianist/singer Gerry Beckley and guitarist/singerDan Peek – all sons of US servicemen –crossed paths during the late 60s.

“Our fathers were stationed at an Air Force base in West Ruislip, just outside of London,” says Bunnell, composer of the song that would change their lives. Bunnell was actually born in the Yorkshire town of Harrogate.

“We were fortunate to be in England at such a pivotal time in music,” he observes, “but our first album was also influenced by the best of the American bands – that whole magical, multi-layered vocal harmony thing.”

The trio decided to call themselves America, and got a deal with Warner Brothers after a gig at London’s Roundhouse and some radio exposure from Bob Harris. Enlisting hot session men Joe Osbourne and Hal Blaine on bass and drums, they recorded their debut album at London’s Trident Studios. Released in January 1972, it did moderately well.

Much of the material that appeared on America had been written on borrowed acoustic guitars, as the trio tapped into the slumbering West Coast zeitgeist of The Eagles, Crosby Stills Nash & Young and Linda Ronstadt. However, the group’s manager believed even bigger things were possible and sent them to Morgan Studios to add some extra songs.

Among them was a Bunnell tune called Desert Song that they had thought lacked hit potential. Later re-titled A Horse With No Name, it went on to top the American singles chart for three weeks in early 1972 and reached No.3 in the UK.

“Everybody had a song called I Need You in mind as the single,” Bunnell chuckles. “It was initially felt that A Horse With No Name was good but perhaps a little too quirky. At first it felt like a bit of a novelty song. It was a shock that it became so popular.”

Neil Young grumbled a little at the tune’s familiarity when A Horse With No Name displaced his own Heart Of Gold from the top of the US chart. Bunnell shrugs: “I never shied away from the fact that I was inspired by Neil, who was and remains a great hero.”

With its lyrics of feeling ‘good to be out of the rain’, the song was a metaphor for escaping the drudgery of everyday life in the city – not promoting drug use, as a Kansas City radio station that banned it wrongly assumed [‘horse’ being a slang term for heroin].

“I’d spent time in the desert and always loved nature,” Bunnell says, “and being in rainy old England, maybe I mentally gravitated back towards all of that.”

America notched up several more hits after relocating back to the US, and in 1975 achieved the considerable feat of outselling every other Warner Bros artist in their homeland. And yet a full decade separates the group’s other two British chart entries, Ventura Highway [from the trio’s second album, Homecoming, in 1972], and 1982’s You Can Do Magic.

“We let things slide in Britain,” Bunnell rues. “We left it so darned long that we couldn’t get a gig in London.”

In what Bunnell describes as “the first stumble of our career”, Baptist-raised Dan Peek quit in 1977 for religious reasons. But the remaining two ploughed on through both good times [which include being produced by George Martin; Janet Jackson borrowing the riff to Ventura Highway for her 2001 single Someone To Call My Lover] and bad [winding up on an independent label; playing in South Africa during the no-go days of apartheid].

Although they did once try to drop A Horse With No Name from their live set, after promoters intervened it was reinstated and remains there today.

Although they’ve released a Christmas album and a slew of compilations and live records, America’s creativity seemed to dry up after 1998’s Human Nature album. But help came along when celebrity fans Smashing Pumpkins guitarist James Iha and Fountains Of Wayne bassist Adam Schlesinger stepped in to co-produce new album Here & Now that features various guests including Ryan Adams. It’s this release that America will promote in March when they play their first UK shows in a decade [2007].

Bunnell is mindful of the fact that people associate the band America with the likes of Bread, the Doobie Brothers and Chicago, but insists his band’s live show betrays the undesirable label of ‘soft rock’.

“Being called ‘middle of the road’ used to make me flinch,” he admits, “but I’d like to think that we’ve carved out our own place in music history.”