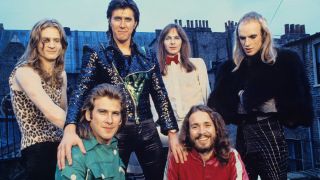 Did you still feel like kids, compared to those actual rock stars who you would see playing at the Speakeasy?

We considered ourselves inspired amateurs. But I’d been in Roxy for a year by then, and I recognised how talented and different Eno and Bryan Ferry were. It was that combination of weird people that created the Roxy sound. And I was just so proud. I was twenty-two – I imagined I was in the Velvet Underground.

After Brian Eno left the band in 1973, was it a divorce scenario? Had he been cast into the outer darkness by Bryan?

I think he had. But I wasn’t having that. He was my friend, and I was upset that he left, so I wasn’t going to leave him in the lurch. So I carried on working with him.

Did Roxy sound and feel like a completely different band to you when you got back together for the Manifesto album in 1979?

Totally. We always felt a great urge to do something different on every album. Over a period of ten years, which is what we lasted, it’s not easy. The band morphed from one thing to something completely different. It started off very much like a band that played live and that built up its songs in a certain way. It ended up as a studio construct, which was Avalon, which was put together bit by bit, using the studio as an instrument.

It always seems that there’s more heat in the early records – more rock’n’roll.

I was probably more into that than what it ended up as. Why do you think the Americans never got Roxy? It was the androgyny. Bowie was like that. But we just didn’t pay the right people in Philadelphia. I think our managers were too mean. I know lots of bands who paid the money and got the plays. We just didn’t have the finances to pay the payola.

When you look at some of the bands that have got into the Rock And Roll Hall of Fame, do you wonder what you’ve done wrong?

No. I don’t spend much time thinking about that. The whole idea of the Hall Of Fame is a very American, basebally thing, isn’t it? We were just looking forward all the time, and trying to come up with new music, and get on with it, and not worry about accolades. They hadn’t invented all those awards when we started. We were in it for the right reasons: to make music and have a good time.