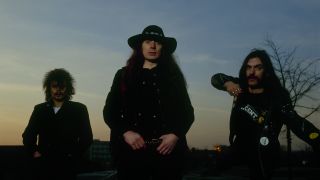 ‘Fast’ Eddie Clarke is one of the unsung heroes of rock’n’roll. As one third of the classic Motörhead line-up of the early 80s, he helped draw up the blueprint for much of what followed – just ask Metallica’s Lars Ulrich and James Hetfield.

But he’s also the sole surviving member of that legendary line-up – drummer Philthy Animal Taylor died in November 2015, and Lemmy passed away the following month. Taylor himself is philosophical about his own mortality, but still wryly funny.

“I’m starting to feel quite old,” he says. “I’ve had some trouble with my heart. I’m on blood pressure pills, and I’ve got emphysema through smoking. They’ve discovered that I’ve got prostate problems as well, so I’m also on pills for that. When I walk down the road I rattle like a tin of Smarties.”

How old do you feel?

I turn sixty-four in October, but I’m starting to feel quite old. I’ve had some trouble with my heart. I’m on blood pressure pills, and I’ve got emphysema through smoking. They’ve discovered that I’ve got prostate problems as well, so I’m also on pills for that. When I walk down the road I rattle like a tin of Smarties.

I am. Man, considering all that’s wrong with me I think I look pretty good. It’s just when your lungs get fucked, that messes with everything else.

At least you’re not drinking or smoking?

Yeah. I quit the cigs in 2008, though I still have the odd reefer. The drinking stopped in 1989 because I didn’t feel the need to go back to it. I wasn’t a drinker before I joined Motörhead, but being in a band with Lemmy and Phil, after about 12 months of speed and no sleep, that’s when I discovered Special Brew. Within another 12 months I had a drink problem. But it was fun, I’m not complaining. It’s the price you pay.

What are the best and worst aspects of getting old?

Well, nobody prepares you for the fact that you start to look ancient. Or that body parts begin to go wrong. Getting up the fucking stairs can be a problem. You look at young women and think, ‘Fuck me, she’s gorgeous’ but you forget that you’re 60 years old and have to slap yourself. Old age is possibly the worst thing that can happen to anybody. All this fucking wisdom shit… yeah, there’s a bit of that. Things that were once important now seem quite trivial. But nobody prepares you for that; they can’t because it’s never going to happen to you. Luckily I’ve avoided arthritis, so I can still play. But as you get older… I’m friends with Doug Smith again now.

Yeah. There was a lot of acrimony but at the end of the day it’s only fucking money. We see a lot of each other again now.

We all go to a lot more funerals now, though.

Don’t we just? I buried my best friend a few years ago. He’s the guy that saved me when I was bleeding from the mouth, took me to rehab. He died of fucking stomach cancer – died within five months [of diagnosis], like Paul Samson who almost went overnight [in 2002].

Isn’t it strange to find yourself fancying women that you’d have considered grannies when you were younger?

Oh, fuck me, yes. Has my quality control gone down, or what? To about number fucking two. I saw some bird the other day: “I’d give her a go.” And then I realised that years ago I wouldn’t have looked at her twice. It’s funny, isn’t it?

Knowing what you know now, would you still have left Motörhead in 1982?

That’s the thing, I didn’t leave. I did ‘kind of’ leave. Phil Taylor also ‘kind of’ left, too. They called my bluff when I refused to do the record with Wendy O Williams [of the Plasmatics, a cover of Stand By Your Man]. I wanted to carry on after that but they said: “No, man. It’s fucking over.”

What have these twilight years taught you?

Well, I’ve wasted a lot of my life not playing. When I look back I think, ‘Fuck me, what was I doing in the 1990s?’ That’s why I’ve made this album. Obviously, nobody buys albums anymore but I did it for the crack, and I think I’ve got at least one more left in me.

I know I’m not the best-liked man in the world; I tend to rub people up the wrong way. I’m starting to realise that as I’m older. It’s not my intention, it just happens that way – look at the reactions of those I’ve worked with, Phil [Taylor], Lemmy, Dave King [original Fastway singer]…

But at least you can look back at it all in the knowledge that you were your own man.

Oh, fucking right. I was lucky. After Motörhead I fell on my feet with Fastway. The way things are turning out, dying at thirty-five of a drug overdose might not have been so bad. We’re all going to go down this chute to really old age. Near where I live, in Twickenham, there’s a place that all of the old TV people go to stay. You see some very famous people hobbling about and you hardly recognise them. But it’s going to fucking happen to us all. No one escapes.