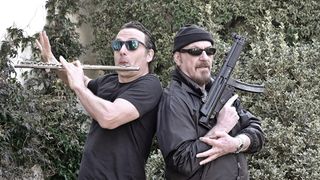 Dunfermline-born Jethro Tull founder Ian Anderson is among rock’s most eloquent and durable exponents. From his international success with Tull to his extra-curricular activities running salmon farms and, more recently, speaking out on men’s health issues, he is no mere pensioner seeing out his twilight years. Welcome to his world…

THERE’S NO SUCH THING AS FATE

My first band, The Blades, comprised a couple of school friends and one other that just happened to include future Jethro Tull colleagues Barriemore Barlow, John Evan and Jeffrey Hammond, but I don’t believe in destiny. It’s all about the pragmatic reality of reducing odds. You happen to meet at school and decide to form a pop group. Everything falls into place, it cannot be preordained. That’s just too supernatural for me.

CORPORAL PUNISHMENT IS A GOOD THING

And I say that as someone thrown out of grammar school for refusing to be caned. I didn’t like pain. I explained to the headmaster that I would accept another suitable punishment for my transgression, but that he could not cane me. The subtext was that he might enjoy it too much. In the end I was sent packing – full-blown expulsion. I walked into the street, tossed my school hat high into the air and left it lying in a puddle.

FIND SOMETHING YOU’RE GOOD AT, AND STICK WITH IT

At the age of four I wanted to be an engine driver, and a couple of years later the army or navy appealed. I was also drawn towards being a policeman or a movie star. Next I aspired to journalism. And at art college I made the not uncommon switch to music. At eighteen years old I might not have been too surprised that five decades on I’d still be doing this. By the time I turned my hand to music I wanted it to be a lifelong career. And failing that, my Plan B was a job in the business as a producer, songwriter or – God help me – at a record company.

DO ANYTHING TO FINANCE THE DREAM

For a while I worked a part-time job at a cinema in Luton. My responsibilities involved cleaning the lavatory. When I left I took a spare urinal with me. It was cracked and had been sitting there in the storeroom, so I carried it all the way back to my lonely attic bedroom. Maybe it would be useful for something? I considered turning it into a drinking fountain.

I strummed away at a guitar from the age of eleven in what was then a skiffle group before developing an interest in Chicago blues. My technique had evolved to the point where I could improvise solos and generally play a bit. And then a bad thing happened: I got a copy of the John Mayall album Blues Breakers With Eric Clapton [1966]. At first I was excited, though very quickly I felt intimidated. It caused me to trade in my Fender Strat for a flute and a Shure Unidyne 3 microphone. And after that revelation with Clapton, I learned of Jeff Beck, Jimmy Page and Ritchie Blackmore, so I had no qualms over moving on.

RELIGION GETS A BAD RAP

A couple of songs on Aqualung do touch upon my difficulty with certain religious elements, but it’s the rantings of a schoolboy. At that age hormones begin racing, we try to find our place and often end up railing against authority. And as a twenty-three-year-old I was harnessing that angst. I’m quite at ease with Christianity and all its forms, also Islam and even Judaism, though I get nervous at any form of worship that chooses to deem its holy book an irrefutable word of God, and a handbook for how we must act.

POLITICS? IT’S TOO LATE FOR ME TO GET INTO IT

In another life, had I not enjoyed any success in music then that’s something I might have considered, but not at sixty-eight years old. As a thinker and an analyser I’m drawn to the world of politics in a broad sense, but were you to ask my political party of choice then I honestly couldn’t tell you. I never know who I will vote for until I’m extremely close to the point of putting that cross into the box. I’m an obsessive that actually reads party manifestos; not all of them, but those that are likely to influence government. Sometimes I re-read them just before the election, as their contents have been known to change. I get really annoyed with people who ideologically vote for one particular party. Right up until the last minute I’m prepared to change my mind.

With an English mother and a Scottish father, I agonised over the Scottish independence debate in 2014. The odds were always that we would have to do it all again, and the vote on June 23 over leaving Europe makes such a proposition all the more likely. These are sad realities of the world we live in. We are driven by even more populous views than in years gone by. People are becoming tired of what they see as the hypocrisy and corruption. Regarding membership of the EU, I’m keeping my mind open. But options come with strings attached, not least to the divisive issue of immigration. And that’s a decision that must be taken on the grounds of economic and national freedom, and not whether we let in five thousand refugees or five million.

MULTICULTURALISM IS A GOOD THING

I embrace Britain’s multiculturalism. A few weeks ago I walked down Whitechapel Road in the East End, and despite being a wet, blustery January morning came away feeling rather upbeat. People literally swarm to the mosque, but they’re Londoners. We are almost at the point where practising Muslims will outnumber practising Christians. And I don’t see that as a negative. But because we feel good about it, should this country remain forevermore an open house with vacant rooms like some cheesy hotel?

People’s lives shouldn’t screech to a standstill, goofing off and playing fucking golf or going fucking fishing just because they reach sixty-five years old. There has to be dignity in old age, and that means playing one’s part economically as well as socially. We should be able to contribute a day or two, maybe three days a week, of meaningful work. Musicians and entertainers don’t leave the stage until somebody drags us off… it’s ingrained into us. If you’re Eric Morecambe or Tommy Cooper, you die with your boots on. It’s easy to say: “Well, you’ve got a great job”, but there’s more to it than that. I can truthfully say that had I no musical career left then I would stack shelves or return trollies in Sainsbury’s before you’d find me playing fucking golf.

Andrew Lincoln of The Walking Dead is my son-in-law, which allows a little insight into the world of TV. But plotlines are kept so secret that nobody knows what’s going to happen. If you’re going to be eaten by a zombie, confidentiality is such that you don’t know until that week’s script arrives. Even as one of the show’s leading characters, Andy has no idea when his days might be up. If I go out with him to an art gallery, Andy is stopped for autographs on a continuous basis. I could never get used to that. Even Jethro Tull fans probably wouldn’t recognise me in Waitrose – an old man looking slightly confused in the vegetable aisle. And I like it that way.

GO AND GET YOUR BOTTOM FELT

Men’s health is important, increasingly so as the years roll by. Most of us guys are not very good at caring about what might happen to us in the future. But it’s also about the people that love us, so that’s a selfish viewpoint. Cancer is not painless and quick, it’s fucking agonising and you will end your life on a morphine drip. So take your health checks. Go and get your bottom felt. Holby City sends me weak at the knees, but when it comes to personal survival I’m right there, awaiting the greased tube.

ENJOY PEOPLE WHILE YOU CAN

The likes of Bowie et al all leave behind something of substance, but the sad thing is that it’s not until they actually drop off this mortal coil that we realise how important they were. Over the last couple of days I’ve been gratified to see the tributes to George Martin. I knew George. And sadly last year he was unable to attend my son’s wedding, so we suspected something was up. Legacy is incredibly important. Lemmy was so well-liked. He was a cult, he was a rogue and despite being a bit cantankerous he was very funny. But he still owed me a pound when he died. True to his nickname – ‘Lemmy a fiver’. I didn’t have a spare fiver for anyone, but I did lend him a pound, which was an absolute fortune in Blackpool back in the 1960s.
I asked but I never got it back. Lemmy didn’t quite die with his boots on, but he’d only removed them a couple of days earlier.

We’ve lost a number of iconic names all in close proximity of one another, but I’ve no fears for the future of rock music. It’s like a revolving wheel, it constantly regenerates itself. It never drifts too far from its roots, and it never will.