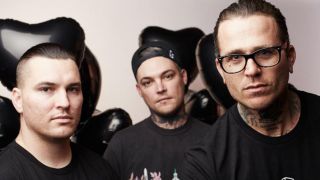 Aussie metalcore heavyweights The Amity Affliction have seen their blend of metalcore riffs and super-syrupy hooks make them one of their country’s biggest metal exports – so why have they drastically switched up the formula for new album Misery? We caught up with vocalist Joel Birch to find out why the band are mixing things up on album number six, what caused a sudden line-up change and what our scene can do better to support each other when it comes to mental health.

Misery feels like a new direction for you. Why did you feel you needed to switch things up?

“We’ve done the same music for so long. For 14 years we’ve been playing a revised version of each album before it and we just thought it was time for a change. I don’t think we could have gone on much longer making the same music, to be honest. I don’t feel like we’d be being true to ourselves if we didn’t make the change.”

So you could say this album is pivotal for you…

“It’s very important. We’re at a point where our lives actually depend on this and it’s pretty stressful but it’s also extremely exciting. For me, it feels like the most exciting record that we’ve ever done, aside from maybe going into Youngbloods. It’s a really different sound and it’s the beginning of a new direction and a new chapter, and hopefully it works... or we’re fucked. Ha ha ha!”

Are you prepared for any potential backlash you might get for changing your sound?

“The comforting thing about releasing [first Misery single] Feels Like I’m Dying, like we just did, is that it’s the craziest song on the record by a country mile. Putting that out and seeing that the backlash wasn’t actually that bad was very nice. I think bands have had a much harder time than we have after putting out new music.”

Drummer Ryan Burt recently left Amity to focus on his mental health. What impact did that have on the rest of the band?

“It really wasn’t working out and he really hated touring. He was terrified of going out on tour. I really felt for him because I’ve obviously got my own shit. He wasn’t getting any sleep, he was stressed out about everything, then the next tour we did overseas with him you could tell his heart wasn’t in it. It was for the best for him and for us. We’d already discussed this dynamic shift in our music and we really needed everyone in the band to be 100% on it. It wasn’t a shock to him when the conversation was brought up.”

You’ve always been very vocal about your own struggles with depression and anxiety. How are you feeling now?

“I’ve recently been diagnosed with bipolar. I feel like it’s become semi-acceptable to have depression or anxiety, but if you’ve got bipolar then you’re a real crazy person. When I got diagnosed I was like, ‘Fuck I am proper crazy.’ That’s a stigma I’ve held within myself that I wasn’t even aware of so I’ve had to readdress the way I think of things.”

Do you feel like metal isn’t dealing with mental health within our scene very well?

“I’m fortunate that everyone around me is highly aware of my mental state so I have a really solid support network. But I worry about other bands out there that, say, have one out of five members that’s suffering from depression. Bands are out there for fucking six to nine months a year, away from home, away from a proper routine, and routine is something that can really help people’s mental health. But people are drawn to music as an outlet so you get all these hurt people out there, touring the world and putting themselves in a situation that is detrimental to their health. Then you get record labels and management pushing these people to their wits’ end. I think that’s something that gets glossed over. If someone is leaving their support network at home, then the band needs to become the support network. And I don’t think that’s difficult. It’s uncomfortable, but not difficult.”

What do you think can the music industry do better?

“The answer is a long and sustained campaign to educate people who aren’t depressed about what people who are depressed are going through. People need to be given the tools to empathise with people. There’s just nothing out there to explain it to people. Change is going to happen, but it’s slow. We’re at the beginning, it’s positive and we just need to make sure it keeps going and just becomes a part of life in the music industry. It’s a discussion that needs to be had.”

The Amity Affliction's new album Misery is out now and available to buy from Amazon or from HMV.