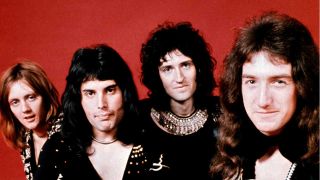 I was in my mid-teens when I discovered Queen. I grew up as part of the music channel generation, and I’d spend a huge amount of time after school and at weekends flicking between something like 12 music channels.

That’s where I came across Queen. They resonated straight away to the point where I went to a record shop in Bristol where they had loads of great vinyl albums and tapes and CDs and looked for their records. I decided to go from the very beginning, so I bought Queen I and II and then that was it, basically. I was hooked.

They brought me into a musical world that I felt a real connection to, Everyone else was listening to indie rock like The Killers and Razorlight and the Libertines. I was, like, ‘No, this is my world.’

Just going through these songs, it’s clear how much of a genius band they were. They had the ambition and freedom to explore whatever they wanted.

It’s from The Miracle. It’s more of the slightly dated-sounding 80s Queen, but it’s still a great song. It’s a real get-up-and-go feelgood track. It’s a blatant rip-off of Boys Of Summer in terms of the melody and the chorus, but it’s got some amazing musical parts – that lovely vocal piece at the very beginning, John Deacon’s bassline, and the solo on it is amazing. And the video, I can definitely relate to that. If I was to come up with an idea for a video to a song like this, it’s exactly what I would have said: ‘High speed train blasting through a brick wall please.’

It’s one of their more poppy, straightforward tracks, but it’s a great piece of songwriting. It’s a video which is kind of hilarious in its own right, but sonically I’m in love with that song. It’s got the signature Roger Taylor flat beat, opening the hi-hat slightly on the snare. It’s just great.

Sheer Heart Attack is one of my favourite albums. It showed that you could create a volume of work within an album. That’s one thing Queen did better than anyone else – they could do something very rock’n’roll, then something very avant-garde, then something very operatic, then a ragtime song, which is what Bring Back Leroy Brown is – all of these things, yet they managed to tie it all together.

They rereleased Sheer Heart Attack a few years ago, and one of the bonus tracks was a version of Bring Back Leroy Brown just vocal a cappella, straight from the desk. If you listen to it, it’s mind-blowing. This is back in the day when there weren’t any gimmicks like Autotune or comping or any of those things. They just had to fucking get it right.

But there’s also a famous performance of them in London, at the Rainbow Theatre, and they do Bring Back Leroy Brown but without any vocals. To hear and see Freddie play the piano part, that really just showed off his talent as a pianist and how gifted he was.

7. You Take My Breath Away

It did literally take my breath away when I first heard it - the opening sequence, the vocal stacking, the notes Freddie hit. I remember specifically learning how to go into my falsetto range from that song - it showed me things I could do with my voice that I didn’t know I could do.

There’s obviously a lot of tracks on A Night Of The Opera that I love, but this one is brilliant. One thing I adored about it was that transition going from The Prophet’s Song into Love Of My Life, when it fades out from The Prophet’s Song into the harp at the beginning of this, then the piano comes in. That blew me away. I know now that a lot of tracks do that kind of thing, but in 2002 or whenever it was I heard it, I hadn’t really listened to a lot of 70s prog rock, and no one was doing it.

Apparently it was written about Freddie’s lifelong friend, Mary Austin. When you know that, it’s a great glimpse into his psyche, and how much of a romantic he really was.

5. We Will Rock You (Fast Version)

The version from Live Killers. Why this one? We Will Rock You is such a signature track – you hear it way before you know who Queen are when you’re growing up. But to hear it in another form, where they’ve basically put it in double time and really rocked it out, it’s, like, ‘Wow, it really fucking works.’ Again, it just shows off the musicality of the band – the drum fills at the beginning, the tiny little bass run that John Deacon does, and obviously Brian May’s roaring solo. I’ve yet to hear a better opener for a live concert.

I’ve always been fascinated by the aristocracy and old money and things like that, and this brings that to life. I grew up in Clevedon, which is an old Victorian seaside town just outside of Bristol. Me and my best mate John would meet up and get chips and buy beer and smoke fags and listen to this while we were walking down the promenade with the sun setting. It feels like you’re being sent back to the 19th century. It’s easy to see what it would have looked and felt like.

My mum was a massive fan of period dramas on the BBC, and I’d stumble in, stoned on a Sunday afternoon, and watch them with her. One thing that I’ve always adored about the early Queen stuff is that it almost echoes back to a different period – that baroque, Victorian age. I sometimes wonder what rock music would sound like if the Victorians had amplifiers and guitars, and I think a lot of the early Queen stuff would have been their soundtrack.

This track for me is a fantastic form of escapism. I just love the part in the middle where he goes a little bit French: [putting on accent]: “My fine friend, take me with you…” It’s fucking genius. I can’t help but smile every time I listen to that bit.

2. March Of The Black Queen

When you’re born on Planet Earth, you’re going to be introduced to Bohemian Rhapsody at some point whether you like it or not. You grow up hearing it, whether it’s on television or on the radio or in a pub. But then to hear a song like March Of The Black Queen, which is from Queen II, you can hear what they were striving for even early on musically and in the studio. Bohemian Rhapsody was the finish line, but this was how they got there. It takes you to so many amazing places.

It’s quite a dark song too. I used to sit in my room with the lights off, with the headphones as loud as I could get them, playing this and just seeing if I could last the whole song without freaking myself out. Is it a freaky song? It is when you’re high.

This is my number one choice. It literally is my favourite song of all time, my funeral song. It’s on the second album, so I discovered it really early on. It takes me straight back to being 15 years old, sitting in the park with my friends on a sunny afternoon, smoking weed, laid on the grass and listening to this.

It just showed off how brilliant they were – it’s a short, piano based song, but it’s absolutely perfect. They were a band who could rock out, but then they could do all these great ballads and also these intricate musical pieces like this. Every Queen song is a universe within itself.