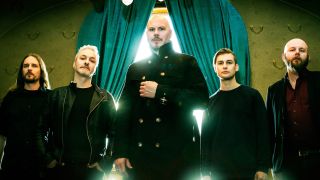 Björn ‘Speed’ Strid is a man of many faces. Best known as the singer for Swedish metallers Soilwork, he also fronts classic rock-loving side project The Night Flight Orchestra. Its in his guise as the latter than we’ve asked him to pick 10 corny old school rock albums guaranteed to get him going. Air guitars at the ready – here comes the cheese!

This is a really good album, there’s some crazy singing on here along with all the harmonies. You can find some isolated vocal tracks from this album all over the internet and they’re mind-blowing.

I’m a huge Stevie Nicks fan, I have a tattoo of Stevie on my leg which I got in Arizona a couple of years back. Nobody can sing like her and I don’t think anybody should try it because it’s just not going to happen. I listened to Fleetwood Mac as a kid when my mom was playing it in the car and I always loved their melodies, but I discovered Stevie’s solo career sometime in the ‘90s. There’s something so liberating about this album, especially the single Stand Back, it’s such a great road trip soundtrack!

Lou Gramm is one of my absolute favourite singers of all time, the tone of his voice is always amazing. 4 has some fantastic stuff in there!

Here’s an album that brings back so many memories! It might be a little bit off from the rest of these albums but my mum was always playing this in the car and their songwriting is fantastic. I love Annie Lennox as well, she’s a powerhouse.

Kayak are a Dutch band I discovered a while back, they’re a fantastic band who have definitely slipped under the radar. Then again, they have 17 albums so there’s an endless well of stuff you can find online and in record stores.

This is one I love by Eddie Money. He’s a great singer, there’s a great vibe on this album - I love all of it.

Then we have this British band FM and their debut album. It’s a great record that’s really packed with good melodies and there’s a lot of good musicianship in there too.

Let’s go to some Scottish stuff, when Nazareth went a little bit disco in the late ‘70s. There was something about the singer Dan McCafferty’s voice over the disco beat that made this a really cool album that’s super underrated.

I've always loved that album cover! As a kid, I was like, ‘Wow, he’s almost touching her boob!’ Somehow in my mind, I always thought it was bacon coming from his hand, but it was only later I realised it was obviously chewing gum so that was a bit of a letdown.

This Heart album has some really good stuff. There’s some crazy singing in there as well. Ann Wilson is another powerhouse.

Soilwork's new album, Verkligheten will be released on January 11, and is available to pre-order now.