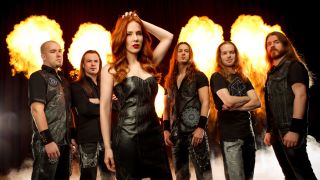 The Prodigy might have grabbed the headlines when The Day Is My Enemy, their first studio album in six years, hit the top of the UK chart earlier this month. But just 11 places below Keith Flint & Co. were Nightwish and their brand new full-length, Endless Forms Most Beautiful, their first with new singer Floor Jansen. Symphonic metal isn’t a new phenomenon – Nightwish, for example, formed in 1996 – but its enormous success is largely undocumented beyond specialist outlets. Typically a Northern European phenomenon, there are dozens, possibly hundreds, of heavily orchestrated, outrageously bombastic combos out there vying for your attention. The best symphonic metal bands feature glamorous mezzo-soprano female singers in alluring gothic attire; their vocals are often counterbalanced by male ‘death grunt’ vocals. The lavish sound has its roots in classical music and power metal; two extremes combined. The end result is so epic, many record stores now file Rick Wakeman albums under ‘skiffle’. Here are six more leading symphonic metal bands that you should check out.

Background: Formed in 2002 when guitarist/vocalist Mark Jansen left After Forever (who also featured Floor Jansen, now of Nightwish). Jansen’s then girlfriend, Simone Simons, promptly became Epica’s vocalist. The band’s career was on the brink in 2008 when Simons was diagnosed with MRSA; she has now fully recovered.

Essential listening: The Quantum Enigma (2014). Their sixth full ­length and their best to date.

Background: WT were founded in 1996 by the Mrs & Mrs of symphonic metal, vocalist Sharon den Adel and guitarist Robert Westerholt. Their music is overblown, overwrought but oddly commercial, and Van Edel – with her soaring vocals and spellbinding stage presence – is the undoubted star of the show. Westerholt stepped down from active touring in 2012 to look after the couple’s children.

Essential listening: The Heart Of Everything (2007). Proof positive that gothic metal can have chart­busting potential.

The USP: Mixing operatic female vocals with male death grunts is a popular approach in this genre, and Sirenia do it better than most.

Background: Formed by multi­ instrumentalist Morten Veland (ex­-Tristania) in 2001. Female vocalists came and went with alarming regularity until Spanish singer Ailyn Giménez joined in 2008 and immediately upped the ante. The band headline the Dames Of Darkness festival at the Bilston Robin 2 on May 9.

Essential listening: Perils Of The Deep Blue (2013), with Nine Destinies And A Downfall (with former singer Monika Pedersen) a close second. A new album, The Seventh Life Path, is due soon.

Background: Formed in 2003 when singer Liv Kristine (ex­-Theatre Of Tragedy) hooked up with German metallers Atrocity. Like Within Temptation, Leaves’ Eyes are led by a couple: Kristine is married to guitarist Alex Krull, who said when they met: “I love Liv’s eyes.” Geddit?! Bonus fact: known to use a life­size Viking longship as a stage prop. They headline the second day of the Dames Of Darkness festival, May 10.

The USP: One of the hardest-working bands around, and with an engaging singer in Charlotte Wessels.

Background: Formed in 2002 by former Within Temptation keyboardist Martijn Westerholt (brother of Robert) and Wessels. Although Delain’s music bears obvious WT influences, it has a lighter touch and is less overwhelmingly bombastic.

Essential listening: We Are The Others (2012). A heartfelt release inspired by the Sophie Lancaster story.

The USP: Tales from the dark side.

Background: Tristania’s roots go way back to the mid 90s. For 10 years they featured the mysterious, broodingly intense vocals of Vibeke Stene, a near ­legendary figure in this genre. Stene left in 2007 to be replaced by Mariangela Demurtas from Sardinia, Italy. With Tristania seemingly on hiatus, Demurtas is currently touring with Moonspell and preparing to release a solo album.

A Night At The Opera: The Unstoppable Rise Of Nightwish