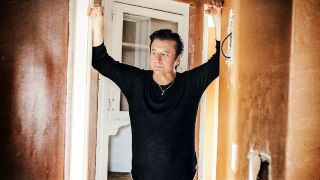 In releasing his first solo album in nearly a quarter-century, Steve Perry is keeping a promise. After exiting Journey in 1998, the singer adopted a low profile. Seven years ago Perry met Kellie Nash, a PhD in psychology who was battling the breast cancer that would eventually claim her life. Before she passed Nash made the singer swear to end his professional isolation. “Kellie taught me that it really is better to have loved and lost than to never have loved at all,” he says.

A love of love music reignited, Perry is in London promoting Traces – and keeping that promise. “Being here and talking to you now is part of that,” he states.

Some critics have complained that the album is too ballad-heavy, but Perry disagrees. “There’s a lot of emotion on the record,” he argues. “I’ve heard that it doesn’t rock enough, but if I rock a lot some demand to know where the ballads are.”

Either way, Traces represents a brand new start. Perry is considering offers to tour – and it’s something he’d like to do. Watch this space.

“Kellie would love this record,” he smiles, “but more importantly she’d be proud that I kept my promise to her and made another record – something I swore that I would never do.”

Traces is out now.

"That song has an almost 1960s-style vibe that reminds me of The 59th Street Bridge Song (Feelin’ Groovy). It evolved into being about two people who meet at a class reunion. They have lives in different cities, but here they are together back where they grew up. They jump in a car, park it up at one of their old haunts, and they jump into the backseat and smooch.

"But there are other interpretations. For instance, if I ever go on a stage again the opening line of ‘It’s been a long time coming since I saw your face’ – that’s about my relationship with the audience."

"It was instigated by myself and Brian West, who I met through [former Journey bassist] Randy Jackson. We sketched on it a while and went out to dinner. Coming back there were all these young kids running around on the corner of Sunset & Vine, living their lives and doing the things we did at their age. We’re still here but they’re doing it now – city girls running wild under neon lights."

"I wrote that song with Randy Goodrum, the same guy that co-wrote Foolish Heart and Oh Sherrie [from Perry’s 1984 solo debut Street Talk] with me. It was around even before I met Kellie. I didn’t tell her about it to avoid affecting her struggle. But after she passed I remembered it on my hard drive and realised that it was about her before I even met her, and now it’s even more about her after I lost her. It’s a very important song on this record."

"Dan Wilson from the band Semisonic sketched that song one afternoon at my condominium, it came together very quickly. I played bass and Dan added the rolling guitar part. That became a symphonic bed for the guitar solo by Thom Flowers [producer], which is one of my favourite parts of the entire record. The Hammond organ parts are by Booker T Jones which was a dream come true for me as Green Onions is the ringtone of my phone.

"It seems as though the subject is isolating himself from romance to avoid pain. But in the dark of the night there’s nowhere to run; you’re in the world, you might as well love anyway."

"That’s another that was written before Kellie came into my life. It deals with profound loss. The lyrics are really poignant in a visual sense. They paint photographs – ‘Your face in a photograph/Staring back in silence/Pretending you’re here tonight’ [he sighs loudly]. That’s what it was like for the two years after I lost her, I sat in my house alone. I no longer have escape behaviours; I behave myself these days, so I had to feel the pain. It was pretty hard. Again, I didn’t play that one to Kellie for the same reasons I just mentioned. She got to hear rough sketches of a lot of the record, but I kept those two completely secret from her."

"John 5 [guitarist Rob Zombie, Marilyn Manson and more] and I put that one together in a matter of minutes. It was overcast outside so that’s what we wrote about. It shows the old guy can still rock!"

You Belong To Me

"I met Brian Eastmond, who co-wrote that song with me, in a studio and had no idea that he used to work with Billy Ocean, who I love. At the start You Belong To Me was more like a Peter Gabriel song. Thom suggested it should be a ballad. We kept the original vocal but rebuilt the song around it. It was a challenge, and I love challenges."

"Thom and I wrote it as a last-minute song for the record after we heard someone say the title – ‘She’s so easy to love’. It’s a simple, quiet, stripped-down thing with an R&B flavour."

"From the first time I heard it on The Beatles Help! album I always thought of it as an R&B song. I didn’t want to put it on the record without the blessing of Olivia Harrison. When I played it for her she listened once, re-started it with the remote and stopped halfway through the second play. I was worried, I thought she hated it. But she said: ‘George would absolutely love this song’ which thrilled me."

"It’s about my hometown [in California] and the time I spent there with my parents and grandparents. I went back there when I left the group, riding around on my Harley Davidson and trying to reconnect with the place after the incredible arc of success with Journey. ‘Love was our season/All from another place in another time’ – that’s me reflecting upon the neon lights of the main street, how it looked in my mind’s eye."

Traces is out now.