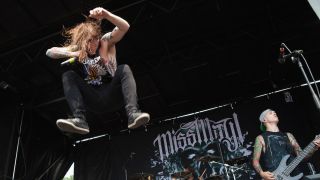 TeamRock recently hopped over to New York and New Jersey to spend a whirlwind 48 hours inside the genre-mashing madness that is Vans Warped Tour 2015. Here’s what we found out in the melee at Camden’s Susquehanna Bank Center and Wantagh’s Jones Beach Theater…

**1. SEEING UK BANDS GET REACTIONS OVERSEAS IS NUTS **Whether it’s pop punk mega-stars-in-waiting Neck Deep, Sheffield metal ragers While She Sleeps or the revamped Asking Alexandria 2.0, witnessing kids singing along to lyrics penned by bands from 4,000 miles away will never be anything other than totally surreal. And speaking of Sleeps, watching them convert a couple of hundred bemused teens into devotees in less than half an hour two days running is a life-affirming sight to see too. Whatever you’ve read, there is very much still some serious fire in those Northen bellies. Oh, and in case you were wondering, AA’s new vocalist Denis Stoff sounds absolutely killer on the older Asking material. Exhale, everyone!

**2. WARPED NOW HAS A CRECHE FOR PARENTS **Well, basically. Titled the Parent Drop-Off Point, Warped has officially bridged generations by inviting parents to accompany their kids for free – and have even provided a specific area away from the main festivities for them to chillax while their sons and daughters lose their shit for 12 hours straight. Fair play, Warped. Fair play.

**3. THE STATES LOVE PVRIS EVERY BIT AS MUCH AS WE DO **The UK has fallen head-over-heels for Pvris’ irrepressible blend of pop, rock and electronica, so it’s nice to see that their homeland appreciates them as well! The Massachusetts trio (backed by touring drummer Justin Nace) draw a helluva crowd in New Jersey, with those sumptuous, synth-fuelled hooks providing the perfect soundtrack to what is a blistering summer’s day. It’s already become cliche to point out what a star Lynn Gunn is, but when you’re packing pipes like hers, it’s impossible to ignore. Global domination is already inevitable.

**4. THE WORLD IS FINALLY CATCHING UP TO THE AMITY AFFLICTION **Australia has been barmy for them for years, but with upcoming UK dates being upgraded and, on the basis of these two shows, their US fanbase getting close to critical mass, it looks like The Amity Affliction could finally be living up to their potential as metal’s next big breakout stars. They draw monumentally huge crowds, and create some of the biggest singalongs of the weekends on both occasions.

**5. METAL IS NOT A BOYS’ CLUB **On the evidence of the crowd gathered to watch Miss May I – arguably the most shamelessly, flag-flying metal band on the tour this year, the longheld belief that metal is an overwhelmingly male-dominated forum could finally be getting broken down for good, with, according to the band themselves later on, their audience being “almost 50 per cent girls”. The Ohio crew even highlight this fact by having all the girls in the crowd get on the boys’ shoulders for a blistering Masses Of A Dying Breed. Needless to say, girls and boys alike proceed to lose their shit.

**6. PEOPLE LOVE BEARTOOTH **Like, love them. As soon as Caleb Shomo’s crew hit the stage, the entire (very, very big) crowd goes absolutely bananas, screaming every single lyric back at the band and, to a man and woman, never standing still for a second of their pulverising, impassioned sets. We’re already ready for that second album, guys. Just saying…