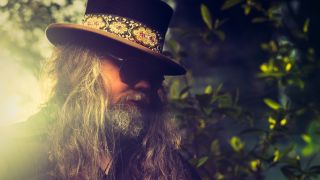 Know it or not, it’s entirely possible that you’ve heard Shawn Smith singing. A big bearded bear of a man, he has featured on no less than 20 albums in the same number of years, among them a handful from a Pearl Jam side-band and an almost freakish minor hit single.

Sad thing is that it’s still more likely that you haven’t. For despite being blessed with one of the great voices of the past three decades, and having popped up in Seattle during the early 90s grunge gold rush, Smith’s musical life has been lived mostly in the shadows and on dark corners.

In April he makes a rare sortie to the UK for 10 solo dates. Just him, a piano and a guitar, and that voice: deep, warm and mellifluous one moment, a celestial falsetto the next. He’s banking on this visit being the catalyst for a step into brighter lights and better times. Right now, he has no more than hope in his heart and 80 dollars in his pocket.

“I am broke,” he acknowledges, chuckling gently. “But here I am going towards fifty and some good things are happening. I’ve just never been a super-go-getter, you know. Which hasn’t helped me move forward as maybe I’d like to.”

Shawn Smith was born in 1965 in the small city of Spokane, Washington, six hours’ drive from Seattle. He spent his formative years grooving to Kiss, Cheap Trick and Elton John on classic rock radio, and from the age of six he was determined he was going to be a musician. “To begin with I didn’t want to be a singer,” he says. “I played drums and guitar, and songwriting became my passion. Prince was kind of my biggest inspiration.”

In 1987 Smith pitched up in Seattle with a keyboard, a guitar and a four-track recorder. He quickly fell in with the city’s burgeoning musical community, finding a patron in Sub Pop Records founder Jonathan Poneman and befriending Regan Hagar, then drumming with local heroes Malfunkshun alongside the Wood brothers Kevin and Andrew. Malfunkshun were on the point of splintering, the charismatic but doomed Andrew Wood going off to form the more grandiose Mother Love Bone with future Pearl Jam stalwarts Stone Gossard and Jeff Ament, and lighting the fuse for what soon exploded in the city. Smith was a regular face at Mother Love Bone shows, until heroin claimed Wood in March 1990. “I shared a rehearsal space with them too,” he recalls. “I was more of an observer at that time. I was mostly sat at home working on my craft rather than going out drinking. I was having a good time being boring.”

It would be summer 1992 before Smith began work on his first record. Poneman introduced him to Steve Fisk, a bookish local producer and musician, with the intention of Fisk engineering a Smith solo album for Sub Pop. Over three months the pair of them fashioned a soulful electro-funk stew entirely at odds with the times. It came out the next year, by which time they were a duo calling themselves, and their debut record, Pigeonhed. Guesting Soundgarden guitarist Kim Thayil added bite to their purring tracks. The album got good reviews and found a cult audience.

By then, Smith was also fronting a second band and record. The same summer he and Fisk started out on their journey together, Smith was invited by Regan Hagar to an informal jam round at Stone Gossard’s place. Gossard was riding the first great wave of Pearl Jam’s success as their Ten debut album lifted off. The three of them hit upon a slow, spare groove, which Smith took home on a cassette and to which he added lyrics and vocals before returning it to Gossard. The result was an aching ballad he’d titled Buttercup and sung like a heartbroken angel, stunning Gossard who hauled the nascent group into a studio for a couple of weeks once Pearl Jam were off the road.

The resulting album, Shame, also released in 1993, under the band name Brad (pictured above), marked Smith out as a stellar talent. Light years from the grunge of Pearl Jam, it was instead more of a late-night soul record, like Smith’s beloved Prince with his libido in check and heart ripped out. Smith was its undoubted star, his grandstand moment a stunning, sweeping ballad called Screen.

Like Pigeonhed, Shame received rave notices. Yet it too was shunted off to the margins, cursed with being out of time and place. Such is the trajectory Smith has followed ever since. There have been other bands and further terrific records, among them four more alone with Brad and a brace of excellent albums with Hagar in the more classic rock-minded Satchel (1994’s EDC, and Family in ’96), but none brought him any wider recognition.

Things got even more bittersweet for Smith as the 90s drew to a close. He made two records with another grunge outsider in Seattle, Greg Dulli, an iconoclast and fellow devotee of Prince. In 1996 he sang on Dulli’s band the Afghan Whigs’ Black Love album. Four years later, with the Whigs having imploded, Smith brought heavenly harmony to Dulli’s de facto solo record Twilight As Played By The Twilight Singers.

In between times, Smith even penetrated the mainstream, albeit accidentally and without credit and on the back of a remix album Fisk and he commissioned of the second Pigeonhed LP, 1997’s The Full Sentence. That remix record, Flash Bulb Emergency Overflow Cavalcade, from the same year, threw up a propulsive repurposing of their lo-fi funk jam Battle Flag by Leeds-based electro crew Lo Fidelity Allstars. Pigeonhed’s original had made it as far as The Sopranos soundtrack, but the remix was a dance hit that also scraped into the UK Top 40, all sorts of bad blood being let loose en route. According to Smith, the Allstars haggled for a cut of the songwriting royalties, based on a short intro section they’d added.

“It was an odd thing, and there was some animosity,” he avers. “We’d paid them to do the remix, and they got signed on the back of it. They were touring with my voice on a record and my name wasn’t on it. I don’t know. It just made me mad and it did nothing for my popularity.”

Ever since then Smith has continued to forge his own winding path. He’s made a series of five finely sketched solo albums, of which the first, 1999’s Let It All Begin, stands out: a glorious DIY confection of bucolic soul-rock that imagines Stevie Wonder fronting The Band. In tandem with these he’s continued in Brad and formed at least two other bands – All Hail The Crown and their precursors From The North, in which he was joined by Regan Hagar and Kevin Wood.

Greg Dulli once hailed Shawn Smith ‘Seattle’s best-kept secret’. Perhaps if he’d settled into a niche or not walked quite so steadfast to the beat of his own drum, he would have been easier to pin down and his artistic life less materially unrewarding. For all that, this most singular talent likes it his way.

“I actually listen to myself a lot, and I’m still fascinated that I’m able to do what I do with my voice,” he says. “It feels like a separate entity to me, but I was born with it, it’s been really worked on and it’s my gift.”

That gift will be next applied to a long-gestated third Pigeonhed record, due later this year. And doubtless to other rich and multi-faceted projects as yet unrealised in Smith’s restless soul.

“I like to just see what happens,” he concludes. “I’m satisfied, no regrets. But then I’m penniless, so there’s also a part of me that’s like, ‘Woah, I’m not so satisfied!’ But everything happens for a reason. And for me, now is the time.”

Stately and slow-burning, this is still the greatest platform for Smith’s voice, set exquisitely here against Stone Gossard’s liquid guitar lines and his own piano.

The smash hit that never was, this finds Smith stirring up and riding a joyous soul-funk groove that dialled up his Prince love.

Pigeonhed (from The Full Sentence, 1997)

There’s dirt under the fingernails of this original version which heads for the spooked 70s soul ghetto in the manner of Sly Stone circa There’s A Riot Goin’ On.

Ending Smith’s first solo album with a crescendo, On The Banks has him at his most wide-eyed and joyful, and the result is a timeless mini-epic.

The Twilight Singers (from Twilight, 2000)

Smith plays the sweet-voiced angel to Greg Dulli’s damaged devil on this wounded, haunted lament that sounds like a ghost’s breath on glass.