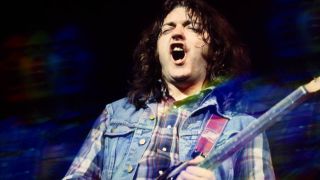 It was the summer of 2015 and the 20th anniversary of Rory Gallagher’s death when Irish president Michael D Higgins hailed the lasting impact Ireland’s most mild-mannered musical revolutionary had made on his homeland.

“There can be no doubt that Rory’s role in the story of Irish blues and rock music is immeasurable, and that his memory lives on, and will live on, through both his own unique talent, and the talent of those whose work continues to pay homage to Rory Gallagher’s great genius.” Speaking at a ceremony in Gallagher’s honour at the official presidential residence, Higgins’ words confirmed how Gallagher’s legacy has grown. And nowhere is his stature more visible than in Ireland.

In addition to a festival held annually in his memory, Gallagher’s Ballyshannon birthplace boasts a memorial statue. In Dublin’s Temple Bar a bronze model of The G Man’s guitar sits above the street sign for Rory Gallagher Corner, while in Cork, where he was raised, over 100,000 people petitioned to have the local airport renamed in Gallagher’s honour – in addition to the sculpture, murals and theatre that commemorate his memory in the city.

Even across the border in Belfast’s Ulster Hall there’s a plaque, a small but significant recognition that at the peak of the 70s Troubles, while his contemporaries shunned the city, Gallagher’s annual shows regularly united the divided communities in a glorious healing ritual.

But although Gallagher’s legacy and Irish icon status run deep, it was not easily won. In post-World War 2 Ireland, every aspect of life – sex, religion, art, culture and music – came under the control of a closely knit cabal of state and church. Against this backdrop the young Gallagher emerged as the reserved rebel who had to fight his musical corner while waiting for the chance to break out.

Usually, Gallagher was diplomatic recalling his time in The Impact and The Fontana, the besuited showbands where he bided his time, learned his trade and tested restrictive boundaries before blowing them wide open with Taste. In private he was more damning – the late Gary Moore, a Newtownards-born fellow showband refugee, recalled Gallagher glorying in his new-found freedom with Taste when they first met in Belfast: “I won’t be joining any more of those showbands. I’m not bald and I’m not goin’ to wear one of those fucking suits.”

For Gallagher, the musical aspirations of his mother Monica (a sometime actress and singer) and father Daniel (a tradesman who sang and played accordion in a céilí band) became a life calling. The traditional Irish background was the seedbed for his future explorations.

“Irish music was all around me as a kid, it crept into my chord playing and the way I do certain solos and certain songwriting ideas, it’s subconscious. Any Irish influence comes in through my personality and my subconscious,” he said in ’78.

But, growing up in Cork, he had to search out the deep blues that would sustain him throughout his career. American Forces Network and Radio Luxembourg provided opportunities to hear life-changing sounds, at odds with the drabness of Irish state radio.

At the local library the preteen Gallagher found out more about the performers who would provide a guide. “I just read all of it,” he later recalled. “The image of pop artists was very bland, it was a long way from Bobby Vee to Big Bill Broonzy and I could see the difference. There were guys determined to play the music throughout their life and to improve and learn.”

At 12, Gallagher grinned on the cover of local rag The Cork Examiner as an acoustic guitar-toting talent show winner. Soon after, brandishing his first electric guitar, he came up against opposition from the Christian Brothers at his secondary school, North Monastery, when asked to fill in playing whatever he wanted at a school variety concert. “They went absolutely insane,” remembered Gallagher’s younger brother Donal. ”They felt he had played the devil’s music.”

Unable to get a bass guitar locally “for love or money”, Gallagher had to defer forming the power trio format he preferred (inspired by Liverpool’s Big Three and Johnny Kidd’s Pirates) for most of his career. But his distinctive locks and rocking approach caused controversy when he let loose with The Impact on Irish broadcaster RTÉ’s Pickin’ The Pops show in April 1965, with a ballistic version of Larry Williams’ Slow Down.

Playing in showbands allowed Gallagher to travel further afield, playing American airbases in Madrid and the clubs where The Beatles had cut their teeth in Hamburg. Opening up to new, American-bred audiences, he saw the potential for rocking the blues with his own single-minded ferocity back home. Encouraged to go north by his pal George Jones from Van Morrison’s band, Gallagher found Belfast – outside the remit of the censorious Federation Of Irish Musicians – enabled his musical ambitions to be realised.

Making Belfast his base in 1967 was a brave move. The city had become an R&B hotbed in the wake of the devastation Van Morrison had wreaked on the local scene with Them. Moore remembered The Maritime’s Club Rado where Taste took up residency as “a very dangerous club, there was always a couple of gangs waiting outside, you were dicing with death just to see a band there”.

And yet Gallagher won over all he encountered.

A force of nature on stage, soft spoken and unfailingly polite off, his fearless devotion to the transcendent power of his musical calling was steadfast. While Gallagher’s oft overlooked lyrics connected him to Ireland’s rich historical store of poetic myth and legend, his practical, down to earth, hard grafting man of the people ethos was no pose.

In the most direct manner possible, he had opened the hearts and minds of his countryfolk to the better parts of themselves. Despite his sad end, haunted by illness, personal demons and exile longing, Gallagher’s great, lasting gift to the land that bred him was to smash through the borders that tied Ireland to a ruinous past. And 20 years on, the president’s words were well-aimed – Gallagher’s homeland still owes him a huge debt.