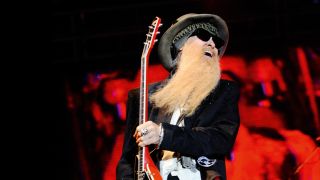 What’s your definition of rock’n’roll?

It would be similar to US Supreme Court Justice Potter Stewart’s remarks when asked if a certain film should be categorised as pornographic. He said: “I shall not today attempt further to define the kinds of material I understand to be embraced within that shorthand description [of hard-core pornography], and perhaps I could never succeed in intelligibly doing so. But I know it when I see it.” So be it with rock’n’roll.

When and where did you first encounter it?

Seeing Elvis when I was five, and then again when my dad took me along to the Shamrock Club in Houston to see the Mary Kaye Trio. At some point I just jumped on stage and started drumming the beat on everything I could find. My dad was told: “That boy got some rhythm in his blood.”

Who in your opinion defines rock’n’roll?

It’s not to be defined, per se. Just feel it.

Can you remember your first guitar?

It was a ’62, single pick-up, single cutaway Gibson Melody Maker, and it was under the Christmas tree right after my thirteenth birthday. That thing was ‘ground zero’ for what came after. I actually played it last Christmas night down on Sunset Strip at the Roxy and its still got it goin’ on – loud!

You toured with Jimi Hendrix. What’s your favourite recollection of him?

He was just the coolest guy, as you might imagine. We got on really well together. When my first band, the Moving Sidewalks, joined his tour we got a chance to participate in a creative intersection of music and art. There was one night we played in a warehouse that was illuminated by black light, and we had these sponges wrapped around the headstocks of our guitars. We dipped the sponges in Day-Glo paint and cranked up the feedback, creating a freaked-out light show in the process. Had that transpired all these years later there’d be some killer YouTube footage.

How important was Texas in shaping the ZZ Top sound?

When Dusty [Hill], Frank [Beard] and I banded together for the first time, we realised we knew the same stuff. We came from different parts of the Lone Star State, but we’d heard the sounds broadcast from across the border on XERF, the million-watt Mexican radio station that blasted out blues, rockabilly, R&B and all kinds of left-of-centre stuff. That kind of commonality, along with the rich tradition of Texas blues, played a huge part laying the foundation for the kind of compatibility that’s endured ever since.

_How important is image to the equation? _

It’s not managed so much as mangled. We ain’t anybody other than ourselves, and we’re making the most of it.

What’s the most rock’n’roll thing that happened in the Eliminator car?

When it was used in those videos for Sharp Dressed Man, Gimme All Your Lovin’ and Legs it accommodated some really pretty girls in fine style. The fundamentals of the culture are, after all, cars, girls and rock’n’roll.

You have your own range of BBQ sauces. What’s your hottest recipe?

Onion, garlic, chili powder, cayenne pepper and habanero chili peppers. Cook ’em up, then add tomatoes, molasses, vinegar, mustard, pepper sauce. Bring to the boil and simmer. Strain it, let it sit, and then splash it on whatever and you’re set. When the head sweats, you’ve got it right.

What would you say has given you the most satisfaction musically?

Playing with Dusty and Frank remains a satisfaction of the highest. Sharing the bill with the Rolling Stones over the years has been the apogee of the overall experience.

Elmore James’s Dust My Broom. That slide is super-fine, and the whole thing is rhythmic and percussive at the same time.

Cars and guitars. Can’t get enough of either, and just keep adding to the fleet and ‘guitarsenal’. They’re the staff of life.

What’s your assessment of the state of rock’n’roll right now?

Rock’n’roll is always in a state of flux. We’re just keeping going what Elvis, Jimmy Reed, Bo Diddley, Muddy Waters, Howlin’ Wolf and those guys started. It won’t soon need to be rescued or saved. It just wants to be played and heard – loud, please.

What will it say on your tombstone?