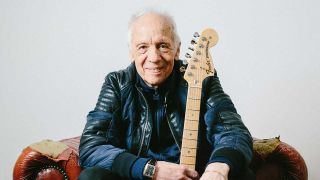 ‘Coming closer to the day/Move on up through the gears or turn away…’ (Coming Closer To The Day, by Robin Trower).

It is a sombre fact that, with every passing month, the heroes of the classic rock era are being steadily gathered in. Robin Trower, still on the road and in rude health at the age of 74, regards old age and the looming final curtain as a frontier to be navigated with increasing determination.

“My feeling is that as you’re going towards the end of life, if I want to get to where I’m going, particularly in music, I’ve got to work harder,” Trower says. “You have to start revving up.”

His new album, the ominously titled Coming Closer To The Day, certainly finds Trower firing on all cylinders. His twenty-third studio album as a solo act, it is another showcase for his skills as one of the supreme electric guitarists of his, or indeed any, generation.

A master of technique, tone and texture, Trower developed an early infatuation with Jimi Hendrix into a transcendent blues-rock style that is entirely his own. He continues to sculpt rugged riffs and celestial solos into a sonic art form. Is he still evolving as a guitarist?

“I’m trying to perfect something,” he says. “I’m not quite sure what it is. But I’m working on it.”

Trower’s overarching reputation as a guitar hero has tended to obscure his track record as a songwriter and, in recent years, a singer in his own right.

“I think I’m growing as a composer,” he says. “By the time an album comes out I’m already halfway into the next one. I keep writing and recording because it’s fun to do. I’m always at it. The main way it’s changed is that I’m now writing for me to sing it.”

In some respects, this brings Trower full circle to the days when he began songwriting as a member of prog-rock legends Procol Harum. His first recorded composition was Whisky Train, the lead single from the fourth Procol album, Home, released in 1970.

By the time of the band’s next album, Broken Barricades [1971], Trower had written three of its songs, two of which – Song For A Dreamer and Poor Mohammed – also featured him on lead vocals.

“I started to realise that I was coming up with a lot more ideas than Procol had room for,” Trower says. “So I was driven to go forward into my own thing.”

Quite apart from their epic hit A Whiter Shade Of Pale (recorded just before Trower joined), Procol Harum were a big-selling, globally established album act with a significant profile in America. So when Trower, with no manager or record deal in place, decided to leave to pursue a solo career, it was a big roll of the dice.

“It was something I had to do,” he says. “I was driven. Those were the days when you could have more confidence. It wasn’t like today, where everybody and his brother’s making an album and putting it out. There weren’t many people who could cut it. It could have all gone awry. But I believed in my creativity. I believed in my talent.”

His first move after leaving Procol was to put together a band called Jude with Frankie Miller, a Scottish singer-songwriter who had recently moved to London, and ex-Jethro Tull drummer drummer Clive Bunker. The bass player in Jude was an old friend of Miller’s from Glasgow called James Dewar.

Trower recalls his first impression of Dewar: “He was an absolute sweetheart. No doubt about it. A lovely guy. Soft-spoken. Soft nature. He was very bright and very well-read. And he had a good sense of humour.”

On paper, Jude looked like a dream ticket. But the four-piece band didn’t work out.

“It was a good line-up,” Trower says with a shrug. “It should have worked better than it did. You just never know.”

The short-lived liaison with Miller nevertheless set Trower on the path to his destiny. He discovered that Dewar was not only a strong and supple bass player, but also a sublime singer with a raw, soulful vocal timbre that recalled the singing of Paul Rodgers, no less.

“I got together with Jim and started to talk about coming up with a band with him doing bass and vocals. Because by then I’d realised what a great singer he was. He wasn’t a natural frontman. He was a quiet guy, not someone to push himself forward at all. The perfect foil for me, really.”

Trower and Dewar brought in drummer Reg Isidore, a West Indian-born Londoner, and the band started rehearsing as a trio. Trower, who was living in his home town Southend-on-Sea, would pick up Dewar from his place in Leytonstone and then drive over to a little rehearsal room in South London, previously used by the Rolling Stones, where they would meet Isidore.

They worked up a bunch of original songs, written for the most part by Trower and Dewar, although on one number, Hannah, Isidore was also included on a three-way writing credit in recognition of his contribution to the “psychedelic” section in the middle.

“We worked that up out of a jam, basically, so we gave Reg a credit,” Trower explains.

How did the songwriting partnership with Dewar work?

“Most of the things he gets credit for, he would have written the lyric, I would think. There were some where I wrote the lyric and he wrote some of it. The bass lines were all Jim’s. Well not Bridge Of Sighs, that was mine. Too Rolling Stoned was mine. Maybe a couple of others.”

One number of special significance, I Can’t Wait Much Longer, was a legacy of the previous partnership with Frankie Miller.

A doomy, spacey, stoner-rock epic, written by Miller and Trower, it would become the first track on Trower’s debut album, Twice Removed From Yesterday, a killer opening statement that introduced Trower as the new guitar hero on the block.

“We wrote a load of songs for that band [Jude],” Trower says, nonchalantly. “But I didn’t move any of them forward apart from I Can’t Wait Much Longer.”

Still with no label or management, Trower managed to secure financial backing from one Ronnie Lyons, described by Trower as “an American guy, who was originally Procol’s tour manager, who was interested in helping me get going as a solo artist”.

Lyons funded a recording session at Olympic Studios in London and, with Trower’s former Procol bandmate Matthew Fisher producing, the trio recorded five songs which would become the basis of that first album. Lyons began hawking the tracks around.

“He couldn’t get a deal with it,” Trower recalls. “So I took it to Chrysalis [Procol Harum’s label] myself. Doug D’Arcy [MD of Chrysalis] said that on the strength of my name with Procol, they could make money out of me going solo. That’s all it was.”

This perhaps explains why the band were referred to only as Robin Trower, and not by a band name. It was an unusual arrangement, given the origins of the group and Dewar’s central contribution as the lead (and indeed only) vocalist and co-songwriter. A lot of people thought Trower must be the singer.

“Yes. That was very confusing,” the guitarist admits. “It was a bit like Manfred Mann, I suppose, where the band was named after me.”

Wouldn’t it have been more equitable to call it the Robin Trower Band?

“To me, it was all about my music. I looked around and I saw people that had left famous bands and disappeared. My name was selling it. That seemed sensible to me.”

Twice Removed From Yesterday was released on Chrysalis in March 1973. Although it made little initial headway in the UK, it quickly made an impression in America.

“We did a club tour of America, pretty much straight away. But what really helped was Chrysalis let us go out and support their big acts out there: Jethro Tull, Ten Years After, King Crimson.”

As well as gaining exposure from playing second on the bill at these big arena shows, Trower benefitted from a sound that was perfect for the album-oriented rock playlists of American radio at that time.

With the groundwork done, the follow-up album, Bridge Of Sighs, released in 1974, became a US blockbuster and remains Trower’s best-selling album to this day.

“I was definitely in sync with those albums,” he says of Bridge Of Sighs. “In America, the FM stations were really powerful then. They started off as underground radio, and grew into being the mainstream. I think that’s why we clicked. And I think because of Jim’s voice as well, it helped the music to cross over. His voice took it into the mainstream.”

The partnership between Trower and Dewar continued over 10 years and eight studio albums, including For Earth Below (1975), Long Misty Days (1976) and In City Dreams (1977).

Their last album together was Back It Up, released in 1983. “When we finished Back It Up, that was the last time that I saw him,” Trower says of Dewar. “He went back up to Scotland and then he got ill. I never quite got to the bottom of what happened to him. His wife said he had to have an operation and something went wrong. But I’m not sure.”

While Trower has evolved as a recording artist and gone through many changes as a live act, he has always featured the classic songs from those early albums in his set-list, and in recent years has reverted to the trio format with the formidable singer and bass player Richard Watts now taking the Dewar role.

“I’m very comfortable in a trio,” Trower says. “And when I play live I have to reference the songs from those early albums. I think ninety per cent of people who come to the shows have got more than one copy of Bridge Of Sighs. Some of them are on to their third copy.

"It’s a blessing to have such a potent album. There is still a magic about those early records. Songs like Daydream [from Twice Removed], I always play that. It’s a wonderful thing to have songs like that in your locker."

Much as he respects his legacy from the 70s, Trower would not want to turn back the clock.

“After a few years I got really sick of playing those huge hockey arenas because they were the most unmusical places. They were really horrible because the stages were always constructed on the day, out of scaffolding with boards on top, so nowhere in the room was there a musical resonance at all.

"I think at one time we were carrying the biggest PA that had ever been built, but you just could not get any music happening in those places. In the end I was so not enjoying it, I just came off the road for about five years. I’m sure it’s a lot better now. The monitor systems now are so fantastic.”

Twice Removed From Yesterday is an evocative title. What does it mean, precisely?

“I don’t have any idea what that means,” Trower says. “Jim wrote that lyric.”

Coming Closer to The Day is out now via Mascot. Trower tours Europe in April (dates below). Tickets are on sale now.