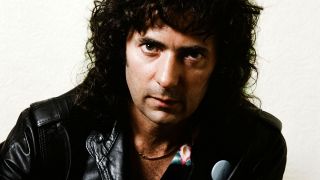 He is one of the great enigmas of rock’n’roll: the visionary guitar hero who created some of the greatest heavy rock music of all time, but went on to play Renaissance folk music, then returned to rock when everyone least expected it; the hyper-sensitive, virtuoso perfectionist with a ruthless Machiavellian streak; the moody ‘Man In Black’ with a penchant for practical jokes.

What is certain about Ritchie Blackmore is that he’s one hell of a guitar player. In a recording career of more than 50 years, he has earned a reputation as one of the most extravagantly gifted and influential musicians in rock history.

He is worshipped by fans such as Metallica drummer Lars Ulrich, who was just nine years old when he saw Blackmore performing with Deep Purple in Copenhagen. As Ulrich once said: “Blackmore epitomised this fascination I had with the bare essence of rock’n’roll, this element of danger.”

Moreover, Blackmore’s brilliance has been acknowledged even by those who have found him difficult – or indeed impossible – to work with. Deep Purple singer Ian Gillan called his former colleague in that band “a giant among guitar players”. Ronnie James Dio, who worked with Blackmore in Rainbow in the 70s, referred to him as simply “a genius”.

It was with Deep Purple that Blackmore became legendary, but his legacy extends far beyond Purple. In the early 60s he served his apprenticeship as a session musician and member of The Outlaws. With Rainbow, the band he formed after quitting Purple in 1975, he made nine studio albums, including such classics as Rising and Down To Earth.

Since 1997 he’s worked with American singer Candice Night – now his wife – in the folk-rock group Blackmore’s Night. This phase of his career has drawn ridicule from some, who find the sight of a rock icon playing a lute while dressed in faux-medieval garb farcical. Purple’s drummer Ian Paice even joked about Blackmore’s demeanour during his last days with the band in 1993, suggesting that Ritchie was suffering from “pre-minstrel tension”.

But, if anything – and perhaps even more since Rainbow surprised everyone by re-emerging with a little-known new singer in 2016 – Blackmore’s Night proves a truth about Ritchie Blackmore that has been evident since he first became a star: this is a man who plays by nobody’s rules but his own.

Less than a year after he quit Deep Purple, Blackmore delivered a masterpiece with this, Rainbow’s second album. Rising had a power and grandiose quality perfectly illustrated by its cover art. Blackmore had retained only Ronnie James Dio in a new line-up featuring heavy-hitting drummer Cozy Powell.

On an album loaded with mighty tracks – Tarot Woman, Starstruck, A Light In The Black – the crowning glory was Stargazer. With Dio’s voice flying high over Blackmore’s earth-shaking riff, the sound swelled by the Munich Philharmonic Orchestra, this was Rainbow’s Kashmir.View Deal

Blackmore always played smart, and never more so than with his brilliant reinvention of Rainbow in the late 70s. Deciding that Dio’s demons-and-wizards shtick was passé, Blackmore replaced him with Graham Bonnet, whose quiff and Hawaiian shirts didn’t sit well with Rainbow’s denim-and-leather demographic but he was ideally suited to the radio-friendly rock of Down To Earth.

With former Purple bassist Roger Glover joining the band and producing the album, Rainbow had Top 10 hits with Since You Been Gone and All Night Long, while Eyes Of The World maintained a link to the past.View Deal

Superior - The ones that helped cement his reputation

Originally conceived as a solo project while Blackmore was still with Deep Purple, this album instead became the birth of a new band. Impressed by Dio when the singer’s band, Elf, supported Purple in 1974, Blackmore made the album using every member of Elf bar guitarist Steve Edwards.

In the mystical heavy rock of Man On The Silver Mountain and Sixteenth Century Greensleeves and the beauty of Catch The Rainbow and The Temple Of The King is some of Blackmore’s finest work, and in Dio he had the perfect foil.View Deal

In the 70s, the double live album was a defining statement for such giants of rock as Kiss, Lynyrd Skynyrd and Thin Lizzy. Blackmore cut two monolithic live doubles with Purple, and Rainbow’s On Stage he matched them for bravura and excess.

Recorded on the Rising tour, it featured the definitive line-up of Blackmore, Dio, Powell, bassist Jimmy Bain and keyboard player Tony Carey. Across four sides of vinyl were just six tracks, including a marathon version of Purple’s heavy blues Mistreated. And while Dio soared, it was Blackmore’s virtuosity that shone brightest.View Deal

The partnership between Blackmore and Dio was never better than on Rising. And although they gave it everything they had on Long Live Rock ’N’ Roll, it would be the last album they made together.

While there were new additions to the group, the album continued in the ‘castle rock’ style of the first two records. Kill The King was all blood and thunder, a precursor to battle metal. Gates Of Babylon was another dusty, Arabic-themed set piece. And the triumphant title track would become an anthem – for Rainbow, and also for Dio in his later career.View Deal

The Lord Sugar of his day, Blackmore fired a lot of people from Rainbow. An exception was Graham Bonnet, who quit when making the follow-up to Down To Earth. But Blackmore had the last laugh. With new singer Joe Lynn Turner, Rainbow had their biggest hit album and single with Difficult To Cure and I Surrender, both reaching No.3 in the UK.

With Turner’s voice lighting up powerful tracks such as Can’t Happen Here and Spotlight Kid, and Blackmore riffing on Beethoven’s Ninth Symphony on the audacious and OTT title track, this was Rainbow’s last great album.View Deal

If Blackmore had wanted to make easy money, he’d have stuck with Purple, or called Ronnie James Dio. Instead he followed his heart by forming a new group with his then-girlfriend Candice Night, and playing the music he loved most.

The first Blackmore’s Night album was a radical left turn, a blend of Renaissance-inspired folk and modern new-age music. But the guitar hero of old resurfaced on the title track, an acoustic-driven tour de force. And the rollicking Play Minstrel Play, with Ian Anderson on flute, has a sense of uninhibited joy. An astonishing transformation.View Deal

The days when he used to smash up a Fender Strat on stage are long gone, but at no point in the last 17 years has Blackmore ever lost touch with his rock roots. Across the eight original studio albums he’s made with Blackmore’s Night are new interpretations of old Rainbow songs, and covers of Jethro Tull’s Rainbow Blues and Uriah Heep’s Lady In Black.

On fifth album The Village Lanterne, he incorporated the Purple classic Child In Time into a boisterous folk jig, and also reworked Street Of Dreams. These help make this the best Blackmore’s Night album.View Deal

Although he was just 22 when Deep Purple formed, Blackmore already had an impressive CV. He’d worked as a backing musician for Gene Vincent and Screaming Lord Sutch, a session player on singles by Tom Jones and Freddie Starr, and was a member of The Outlaws with Chas Hodges, later of Chas & Dave.

Collected on this box set are 52 tracks on which the young Blackmore cut his teeth. The content and quality vary greatly, but there’s a real gem in The Outlaws’ 1964 single Keep A Knockin’, cited by John Peel as the first heavy metal record.View Deal

Ritchie Blackmore’s Rainbow: Stranger In Us All (RCA/BMG, 1995)

In 1995, two years after he left Deep Purple for the final time, Blackmore revived his second great band. It turned out to be Rainbow’s last stand until 2015 – and a miserable one.

In contrast to previous line-ups, the mid-90s Rainbow was staffed by B-list names such as singer Doogie White, who could do a passable impersonation of Ronnie Dio but lacked the gravitas to front a legendary band. Plus, Blackmore didn’t give him much to work with. Stranger In Us All was a dull, laboured rock record, and perhaps the last of its kind.View Deal