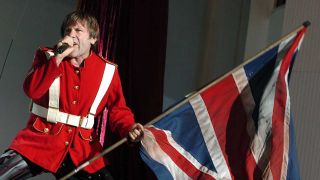 Dan Franklin's new book Heavy: How Metal Changes the Way We See the World is a study on heavy metal that ventures where few others do.

A cultural examination of heavy metal, It tells how the imminent threat of nuclear apocalypse gave rise to Metallica, how death metal bands are resurrecting the horror of medieval art, and lays bare the connection between Pantera and philosopher Friedrich Nietzsche.

In this excerpt, Franklin tells of the relationship between Iron Maiden's 1983 song Where Eagles Dare, and the 1968 film of the same name.

Heavy: How Metal Changes the Way We See the World is out now.

If tales of derring-do are one of Iron Maiden’s pillars, then Where Eagles Dare, the opening song from Piece of Mind, is one of their finest. It is based on the 1968 film directed by Brian G. Hutton and starring Richard Burton and Clint Eastwood.

For a band with an interest in themes of betrayals, the film’s storyline is made up of a mesh of them, plot twists and double – even triple – agents. The film opens with a Junkers Ju 52 German transport plane flying over, and through, a mountainous winterscape. It is on its way to deliver its occupants, a band of seven soldiers led by Burton and Eastwood, to rescue a British general who has crashed behind enemy lines and is being held captive in Schloss Adler, a fortress primarily accessed by cable car.

The song begins with a triplet-infused, rolling drum introduction from Nicko McBrain that deliberately harks back to the drum intro of Rainbow’s Stargazer.19 The ra-ta-ta-tat of the drums that sets up the repeated groove passages of the song – hit alternately on the snare and the tom-toms, like the echoing report of a machine gun – recalls the marching and scattershot drum patterns of the film’s opening score.

Written by Ron Goodwin, the film’s music summons forth the airplane out of the mountains, along with the blood-red Teutonic lettering of the opening credits.

Bruce Dickinson begins the song with a quick-fi re verse-chorus/verse-chorus describing the snow-covered Bavarian Alps as the plane rumbles through the air with its anxious, expectant cargo. His histrionic, compact vocal lines serve to lift the curtain on the song and then he steps back to allow the band to tell the story of the film – this time cinema of the mind, with a particularly vertiginous Dave Murray guitar solo and the ascending harmonies that simulate our heroes’ gut-wrenching cable car ascent.

Dickinson comes back in towards the end of the song to recap the way the intrepid crew infiltrate the castle and then make their supremely destructive escape, powered by copious sticks of dynamite, littering their route out of the nearby village with burning vehicles.

With Burton and Eastwood posing as Nazi officers throughout, and making use of German armaments such as Luger pistols and Schmeisser machine guns, the film – with its twist and turns – has a duplicitous relationship with British patriotism.

As the writer Geoff Dyer puts it in his 2018 book about the film, named after Burton’s famous call-sign, Broadsword Calling Danny Boy, "If the getaway is a spectacularly prophetic and triumphant allegory of Brexit, then the consequences and costs of that leavetaking are impossible to ignore. Everything in the film is German."

At least Where Eagles Dare portrays a minutely plotted and executed MI6 mission, which is more than you can say of the incompetent tragedy of errors that was the Brexit process.

The song is also an encapsulation of Iron Maiden’s raiding mentality: fly in, fuck shit up, and leave. The band, and particularly Bruce Dickinson, whose heart seems closer to the RAF than the film’s special forces, would probably identify most strongly with a character who doesn’t really feature in Alistair MacLean’s script but who does make a dashing cameo in Maclean’s accompanying 1967 novelisation: Wing Commander Cecil Carpenter.

The insouciant pilot drops the team off at the start of the novel and picks them up at its conclusion, twiddling his handlebar moustache and reading a book as he flies under cover of night, enjoying steaming hot coffee in the sub-zero flying conditions. For Carpenter, heroism comes easy – in fact, it is something he’s entitled to.

Heavy: How Metal Changes the Way We See the World is out now.