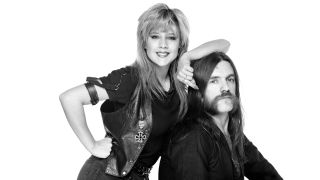 Lemmy and Samantha Fox were the unlikeliest of partnerships – until The Nolans came along, that is…

I first met Lemmy when I was just 17. We were at a Capital Radio charity event – it was a spaghetti-eating competition. It was me against Lemmy, and we had to see who could eat this pasta dish the quickest. It was a really fun night and we got on together as mates. He asked me about my career and I told him I was a model, then he asked me what music I liked and I told him I was a frustrated rocker, really. So he invited me to come over to his house to write some songs.

We just got on so well. We started talking about music, and what really made me laugh was that he put on a VHS tape of ABBA and said they were his favourite band. He knew a great pop tune when he heard one, you know?

We wrote a song called Beauty And The Beast. We even started planning what we were going to do in the video. It was going to start with our backs to the camera, doing our make-up, we were going to turn around… and Lemmy would be playing me, with a blonde wig on, and I was going to be dressed as him.

He offered me a Jack Daniel’s. I said, “Oooh, I’ve never had one of them before.” I was more of a white wine spritzer girl. So we had a few Jack Daniel’s and, as you can imagine, the ideas started flowing and the song got madder and madder.

Then we started thinking about the B-side and we decided to do Islands In The Stream by Kenny Rogers and Dolly Parton. We did loads of press about it but then Lemmy was in litigation with Bronze Records and he couldn’t release anything for a lot of years. And where that song is now, I do not know.

The next time we saw each other was when I was dating Paul Stanley from Kiss. I went to see Paul play with Kiss at Donington and Lemmy was there, along with Iron Maiden, Guns N’ Roses… It was just a fantastic day.

Motörhead did a show for Channel 4, The Tube. I couldn’t go because I was on tour in America. So my mum, Carole, and her boyfriend went along instead. My mum went out and bought a leather jacket specially because Lemmy had said, “You’ve got to fit in because you might be on camera.” But unfortunately she bought a white leather jacket. So they made her stay in the green room because she didn’t look like a Motörhead fan, ha-ha!

He used to come up to ours for Sunday dinners. My mum used to say: “I’ve got to feed you up, Lemmy. You’ve been on the road too long. You need a good roast dinner.”

There was a big Hawkwind reunion some years back, the Hawkestra thing. I sang _Master Of The Universe _– although I changed the words to ‘I am the mistress of the universe’ – and I performed Silver Machine with Lemmy. So over the years we’ve just been really good pals.

When my dad died Lemmy wrote me a beautiful poem; it was like two pages of A4 paper. He read it to me and it made me cry so much. I said, “Lemmy, stop it now, stop it now.” He had this full-on rock’n’roll persona but he was a real softie and could write some beautiful poetry. When my dad died he said, “Don’t worry, Sam, when you get married I’ll walk you up the aisle.” How great would that have been? But that marriage never happened, ha-ha!

The last time I saw him was in Moscow about a year ago. All of Motörhead were there and I said to the guys, “Come on, we should all go to Red Square, do a bit of sightseeing.” It was, like, 15, 20 degrees below zero. I’ve got my big coat on and my hat and my scarf. We knock on Lemmy’s door, he comes out and he’s just wearing a leather jacket and a T-shirt. I said, “Lemmy, you can’t come out like that, it’s freezing.” And he said, “Me? Wear a fuckin’ coat and scarf? You’ve got to be fuckin’ joking.” After a couple of minutes outside I looked at him and he’s got icicles hanging from his moustache. But he wouldn’t give in!

I lost my partner [Myra Stratton] to cancer this summer. It’s a vicious disease. But Lemmy was a machine. He toured constantly, he loved his fans, and the fans loved him.

Was I jealous when he started hanging out with The Nolans? No, not at all. I’m not that sort of person. He can hang out with who he likes. He weren’t my boyfriend!

The first time I met Lemmy, the Rockin’ Vickers (I was lead singer) were playing the Oasis Club in Manchester. It was about late ’65, and he was in the audience. He came to the dressing room, we started to chat – you couldn’t miss him ’cos he had the longest hair you’ve ever seen. He looked like a typical hippie of the time. Obviously he had the ability to say, “Can I come and help you set up your equipment?” and this and that.

So he tagged along with us for quite a while. He was great because the road managers couldn’t tune guitars; Lemmy could play, so he took care of it. After he’d been with us a while he knew the repertoire really well, and he’d join in with jam sessions. We didn’t pay him, we just fed him and gave him cigarettes.

He always wanted a nice pair of boots. I’ll never forget this. We got our stage clothes from a place owned by someone connected with The Hollies’ management, and we promised him that if he behaved himself, he’d get a pair. One of the lads in the band had feet about a size smaller than Lemmy’s, and when he’d finished Lemmy would squeeze his feet into them and walk round like a bandy-legged cowboy. But when he got his own boots he was made up – Cuban-heeled things.

Then one night, Ian and Nick [guitarists] had a big bust-up and left us without a guitarist. And Lemmy said, “I can do it!” And we said, “Don’t be stupid!” But we ran through some numbers, and we were all gobsmacked. He went onstage that night and he went down a bomb. And in them days he was playing lead guitar, though everyone knows him as a bass player. He was brilliant.

Back then we didn’t take drugs and we didn’t drink much at all. We were just into what we did. We were more interested in beans and egg on toast at the Mayfield transport café on the A6 [laughs]. But we all got on well.

After the group days we didn’t see each other for 16 years, but when we all got together it was just as if we’d seen each other yesterday. We loved him to bits.

The last time I saw him we were at the Apollo in Manchester, 2012. Lemmy invited us. We went along at about three o’clock. We were yakking away in the dressing room, and after an hour or two we said, “Look, you do what you have to do, blah-blah.” But he insisted we stayed. And we stayed until half-past nine, reminiscing… It was great.

Remembering Lemmy: The Fan (No.1) – Motorhead Mick (aka Mick Stevenson)

Just before Christmas one year as the London aftershow bash at Brixton was coming to an end, I’d gone over to Lemmy to say thanks and goodbye.

We had a drink and a chat, I got the obligatory photo with him, shook hands and turned to go. I’d only got a few paces when Lemmy called me back. He told me how much he appreciated what Alan Burridge [fan club head honcho] and myself did for him and Motörhead, pulled a wad of notes from his back pocket and thrust them at me saying: “Here, you and Al have a great Christmas on me!” To say I was stunned is an understatement.

Lemmy was also famous for his sense of humour, but to sit backstage having a chat with him about nothing in particular, and laughing out loud as the conversation went off on all sorts of tangents, was just priceless. No one was safe from his good-natured piss-taking either! I’ll also remember him as the gracious man that happily wrote a foreword to my book [The Motörhead Collector’s Guide] before I’d even written a word.

It’s December 1974. Me, Lemmy and assorted members of Hawkwind are cowering in the dressing room of the City Hall, Newcastle. The room’s reinforced fire doors, which lead to the street outside, are buckling under the strain of an onslaught by the Geordie chapter of the Hells Angels.

If the situation wasn’t so terrifying it would almost be comical. The doors are bulging inward like something out of a Tom & Jerry cartoon; numerous dents appear as the Angels utilise all manner of spanners, wrenches and motorcycle-related implements in an attempt to gain ingress and confront their foe.

Lemmy, it appears, has “done something” to upset the local Angels. It is not clear what this is, other than it’s “something” very serious.

As the doors’ hinges start to splinter, Hawkwind manager Doug Smith decides to act. “You lot go out front and deny everything,” he urges. “Lemmy isn’t here, he left early, he’s sky high and six thousand miles away.” Grabbing a tartan blanket, Smith drapes it over a stooped Lemmy and smuggles him out of the City Hall and down a back alley. The rest of us are left to confront the Angels.

Words from a song from Hawkwind’s just-completed gig spring to mind: ‘Do not panic, do not panic…’