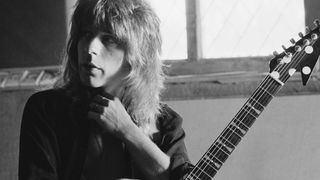 In a small apartment filled with recording equipment on a wide, leafy street in LA, Janet Robin is demonstrating the swift-fingered chord progressions she first learned under the tutelage of Randy Rhoads.

She might not be as much of a household name as her old teacher, but she put her training to good use, first as the guitarist in Eighties rock group Precious Metal, and later as a session musician for the likes of Lindsey Buckingham, Meredith Brooks and Michelle Shocked. Most recently, she was hired to teach guitar to Jennifer Jason Leigh for her role in Quentin Tarantino’s The Hateful Eight.

When Rhoads began teaching Robin, he was performing in the original Quiet Riot lineup. The band hadn’t yet released their breakthrough 1983 album Metal Health, and were playing LA rock clubs but struggling to get a major label deal. Randy taught at his parents’ music school, Musonia, in North Hollywood, and nine-year-old Robin was his youngest, and only female, pupil. She spoke to Classic Rock about learning from one of the greats.

How did you end up being taught by Randy Rhoads?

I started playing classical guitar at six. My brother was playing, so I was doing everything he was doing. We got referred to [Rhoads] by someone I can’t remember, maybe someone at the other place we were taking lessons. They said he was an amazing guitar player and a great teacher. The little school he taught at was owned by his mother. It’s still there, his brother Kelle runs it now. So we went, and I started taking lessons from him. The only other person I knew who was doing that kind of crazy, out-of-this-world stuff was Van Halen. I’d never seen anyone play like that before. I started bringing my friends along, like ‘wow, you have to see this guy play’. Lessons were like $8 for a half hour.

He wasn’t as structured as you might think, even though his mom taught there and was a very stern piano teacher. It was comprised of one of us playing a rhythm, and I’d learn rhythm guitar that way. He’d show me a progression, and I’d play it. Then he’d just be crazy soloing. Later down the years it switched, so he’d play the progression and I’d have learned scales and licks and stuff and I’d be playing. The most important thing I learned was how to incorporate writing a song with a guitar riff. If you listen to my music, many of the songs start with riffs. You don’t hear that a lot now, but I still do it, I don’t give a shit [laughs].

So did he tell you that to write a good song you need a good riff?

No, he didn’t really say it, but even the progressions he gave me weren’t just standard chord changes. I try to teach my students the same way. Of course, they have to learn the basics, but I’d already done that with my other teacher, so I went in with my electric guitar he taught me barre chords. I was a nine or ten-year-old girl, and that’s another thing – he couldn’t give a rat’s ass that I was a girl. You either played good or you didn’t. I think there was one other girl but I don’t think she stayed very long. He wasn’t an asshole or anything, he was very softly-spoken. He was also a very good blues guitarist, so I started with blues. Johnny B. Goode was the first song I ever learned from him, not Iron Maiden or Black Sabbath. I learned pinching and hammering from him later, but in the early days it was all blues riffs. He made it known that if you couldn’t play blues, you couldn’t play lead guitar.

No, there was no reading music. I still don’t know how to read music now! I can read chord charts, and tabs very slowly. By he taught me by ear; [my ear] has been trained very well.

Is there any advice he gave you that’s stayed with you ever since?

Practice! Just practice. And he didn’t even have to tell me; I was so obsessed with guitar at that point that my friends were outside playing Cowboys and Indians and I was in my room playing my Les Paul. I didn’t have anyone to play with me, so I’d lock myself in my room with two cassette players. I thought I was a genius; I recorded a progression on one cassette player, then put a cassette in the other player and recorded my solo on it. That’s multitrack recording, but I didn’t know that at the time, I just wanted to know what I sounded like [laughs].

Did Randy become a family friend?

No, but now I’m much closer to his family. There were a few times when my parents couldn’t pick me up [from lessons] so his mom would drop me off at home. My parents and I did go to his shows and he was quite a fanatic about health, he was coming down with a cold one time and was really upset about getting sick before a show. My dad was really into vitamins, and he was on this Vitamin C thing, especially the crystals. Back then it was white powder you mixed into a drink, and we put it in a baggy and brought it to the show. We handed it to him before the show, and people were looking at the baggy like, ‘What the fuck is going on?’ I was about ten years old giving him a bag of white powder at the show. And Randy was like, ‘Oh, thank you so much!’ I remember that very well.

When was the last time you saw him?

It was the very last lesson I had before he went on the second Ozzy tour. He came out and he told my mom, ‘She sounds great. She’s going to be just as good or better than me when she’s my age’. I’m not just saying that to sound like a big ego thing. I’m not as good as him! But he never wanted you to sound like him, he wanted you to come up with your own thing, to expose you to all these techniques and styles and put it in a blender and make your own thing. He gave me the confidence to think it didn’t matter being a girl. My brothers wouldn’t let me play football with them. ‘You’re a girl, you can’t do that!’ But he never said a thing like that, so I didn’t think I was weird playing guitar.

It wasn’t ‘til later when a few things were said to me. There have been very sexist things said to me, but not that many, considering. I think when people see me they realise I can play, and they don’t really care. I’m lucky. I stayed in touch with his mom, when I got signed in Precious Metal I got his mom a record and said, ‘Look what your son did for me’.

Are you still friends with his family now?

We’re very close. I play every year at the NAMM show at the Randy Rhoads memorial show. His sister owns a wine-tasting room and there are many events I do there. In fact, the family donated to my crowdfunding campaign for my latest album. They came to my wedding. His mom recently passed, but she lived til about 96. I played at her funeral.

When did you find out he’d died?

I was in high school. My mom called the school and they sent a message to me in class, and I just lost it. I felt like someone had just pulled the rug from underneath me. I’d been having lessons from his sub while he was away, he was very good, but it wasn’t Randy. I was very disappointed because I’d lost my first mentor. Things did seem a little more unknown, but I’d known he had this big gig and I didn’t know if he was going to come back as a regular teacher anyway, so I’d sort of accepted that. I knew I loved guitar, I wasn’t going to stop. But it was very upsetting. I was crying at lunchtime and people were like, ‘why are you crying?’ When I said my guitar teacher died, they were like, ‘who?’ But he got very famous after he died. He was starting to get famous during the Ozzy time, but he became legendary after he died.

Robin admits she was shocked when Precious Metal were dropped from their label. “I was young, and I thought it was going to be forever,” she admits. After her gig as a member of Lindsey Buckingham’s touring band ended in 1994, she decided to strike out on her own. Inspired by Ani DiFranco self-releasing her material, she set up her own imprint, Little Sister Records. An early adopter of crowdfunding, she successfully funded an album, Everything Has Changed, in 2010, which she was invited to record at Cash Cabin, the studio run by Johnny Cash and June Carter’s only son John Carter Cash. She’s just finished recording her second crowdfunded solo album, due for release in June – again at Cash Cabin – and will be touring Europe in May and June (dates below).